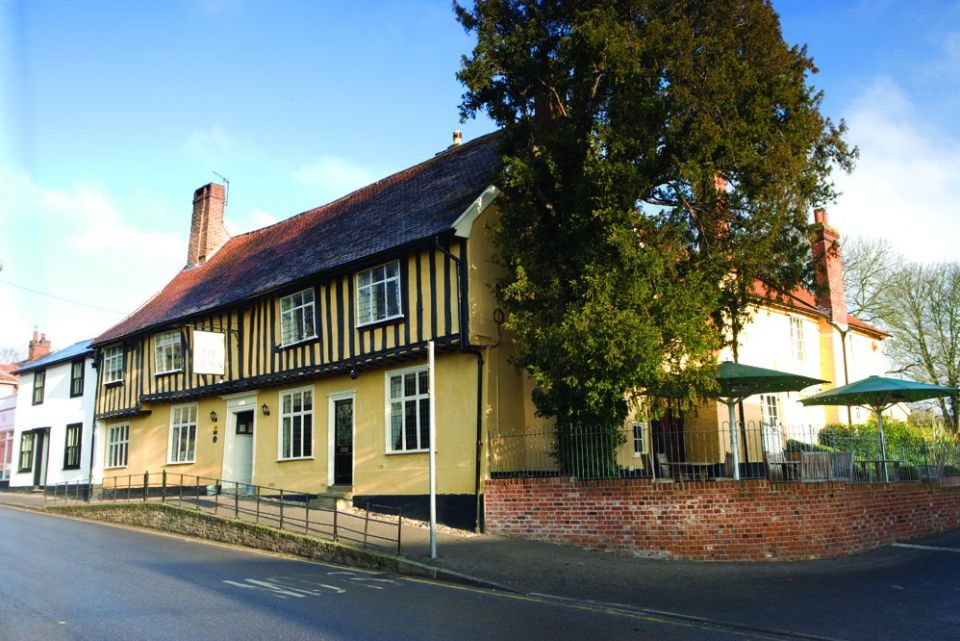 Charming inn situated in a peaceful village close to the historic town of Lavenham.

When this Grade 2* listed former coaching inn was restored in 2003, Suffolk antique shops were scoured and local craftsmen sourced to create a very stylish hotel. All twelve en-suite double rooms have such unique characteristics and styles that you can visit again and again for a completely new experience.

In September 2015 Chris and Hayley Lee returned to The Bildeston Crown, the Suffolk inn they managed from 2003 – 2013, but this time it’s their own business.

The pair who had spent two years with the Chestnut Group were quite simply made an offer they could not refuse from The Bildeston Crown owner and local farmer James Buckle.

A bit of our history:

” In October 2008, The Bildeston Crown was named Best Small Suffolk Hotel” in the Tourism in Suffolk Awards and subsequently won the award in the category in the East of England Awards.

Food is an integral part of The Bildeston Crown experience and Chef Chris Lee is developing an excellent reputation for his innovative style.

” In September 2007 he was named by The Good Food Guide joint winner of the Up-and-coming chef award for the whole country.

” In the same month the restaurant was awarded the much coveted Three Rosettes by the AA making The Bildeston Crown now the only restaurants in Suffolk to have this status.

Facilities include an 80 seater restaurant; two private dining rooms (one of which has a marriage license); two bar areas; a lounge area with open fire; outside courtyards and 24 hour room service.

Quality produce sourced locally whenever possible and with much from the owners’ own farm, is used when in season, to get the very best results. The eclectic menu at The Bildeston Crown caters for every taste. Vegetarian twists and seafood favourites are plentiful but the confirmed carnivore is most definitely in for a treat if not a difficult decision with the menus which change regularly. Classics features regular favourites; Select is a little more adventurous and at times really quite experimental and Crown Tasting is perhaps the ultimate dining experience at The Bildeston Crown. There is also a mid week set lunch menu.

The Bildeston Crown has attracted some very positive press comment from local and national media:

” Times reviewer Giles Coren “finds a place (The Bildeston Crown) so good, he recommends it without even eating there” when he apparently stumbled upon “the best little progressive kitchen in Suffolk” (Times 19 April 2008).

There is a drop-off point in the car park to facilitate disabled access.