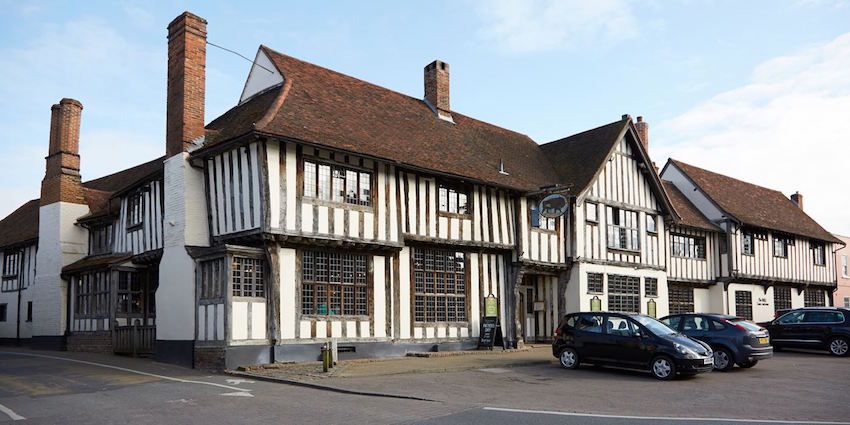 The timbered Bull Hotel was built in 1450 and was formerly a coaching inn.It has retained many period features including a magnificent Elizabethan fireplace.

The Bull was built about 1450 in all probability for a wealthy wool merchant of the town. Its original timber work both outside and inside is unusually well preserved. That of the exterior was discovered in 1935 when a hundred year old brick front was removed; at the same time the fine timber work in the bar was uncovered. On a beam in the lounge is carved a ”Wildman” or ”Woodwose”, a mysterious being frequently depicted in the decoration of the Middle Ages. A feature of the external decoration is the little Gothic window high up on the Bull Lane side of the house. The Bull has been an inn since 1580 or earlier. In 1648 a well to do yeoman of Melford was attacked and killed in the entrance hall and his assailant was convicted of murder and executed. In coaching days the Bull was the principal Posting House of the town and a stopping place of the London, Bury St Edmunds and Norwich coaches. Today the Bull is renowned locally for its excellent food, fine wines and real cask ales. Conference and meeting rooms available. Nearby Kentwell Hall and Melford Hall.

On A134 from Colchester to Bury St Edmunds.