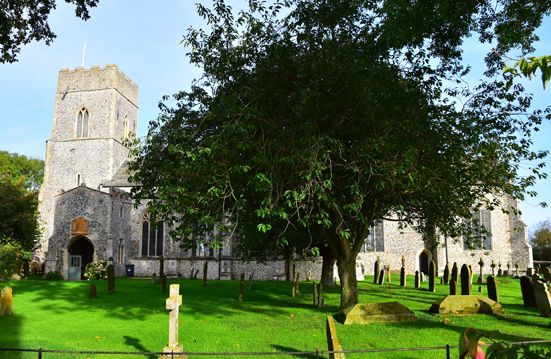 The church at Catfield was completely rebuilt in the 14th and 15th centuries, built in traditional Anglian flint and stone.

All Saints’ is a typical Norfolk parish church; built of flint in the Middle Ages, with a square west-end tower containing six bells, a nave with two aisles, a chancel, a porch with a parvise (room above). It was largely built in the late fourteenth century although the tower may be older, while the chancel and porch are fifteenth century. It has a rood screen between the nave and chancel with sixteen royal saints painted on in the fifteenth century; the arcades have faint medieval paintings discovered in the 1840s underneath the whitewash. The Victorian seating arrangement replaced earlier box pews around a pulpit in the middle of the nave.

The oldest part of the church is the 14th century west tower. In the tower is a first floor chamber used as a residence by the priest. It contains a fireplace and recessed stone cupboard, with light from four narrow lancet windows. Above the nave arcades are traces of wall paintings. One thought to have been painted around 1377 and shows Stephen kneeling in prayer, while two men throw stones. All Saints contains many more treasures click on the link below to discover more and to find out about our services.