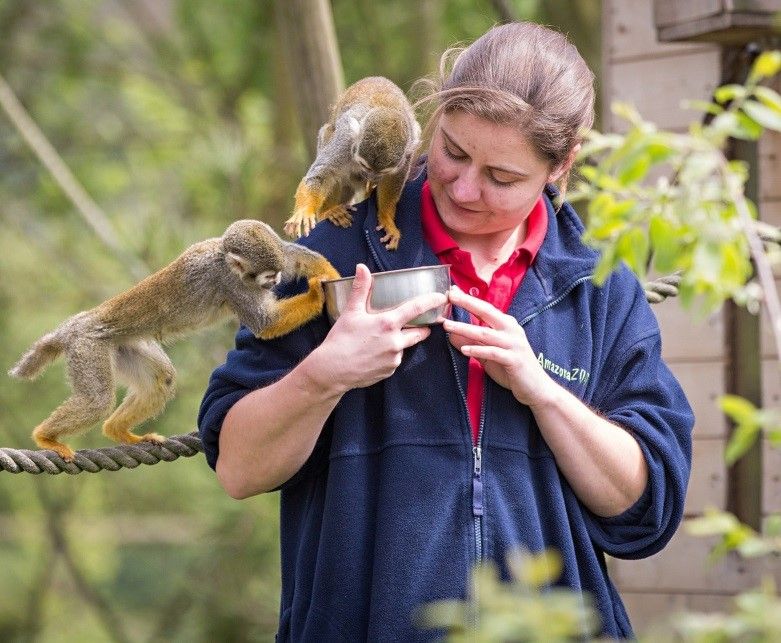 Amazona Zoo in Cromer, Norfolk, is one of the county’s most unique and fun days out where families can discover South American wildlife. The zoo is home to over 200 tropical animals including jaguars, monkeys, snakes, flamingos and tapirs. There is also a large well-equipped indoor soft play area, for under-12’s.

Plan a visit to Amazona Zoo in Cromer, one of Norfolk’s most unique and fun days out where families can explore animals native to South America. It is home to over 200 tropical animals including new Jaguarundi, birds of prey, Pumas, Parrots, Monkeys, Snakes, Flamingos and Tapirs. Also you can find a Spider House and a cute Guinea Pig Village.

The zoo also has an outdoor adventure play and picnic area featuring the popular Jumping Pillows!

The Yurt is the hub for educating visitors and includes the history of South America and facts on the animals who call Amazona home. It’s also available for birthday parties.

There is the Jungle Café for homemade lunches and a gift shop on site.
The zoo is committed to helping visitors discover nature and provides education on conservation issues set within 15 acres on the north Norfolk coast.

WHAT ANIMALS AND BIRDS CAN YOU SEE?

There are at least four ‘feed the animal’ events a day, including pumas.

Feline Forest – Pumas, Jaguarundi and Ocelot
Tropical House: Entering from the Capuchin walkway, visitors will encounter the Currasow and the Piping Guan. After the bridge, see the Spectacled Caiman and spot the Red-tailed Catfish or the Black Pacu. Follow the path into the shadows to find the Iguanas, the Anaconda and the Boa Constrictors.
South American Wildfowl: See native migratory species such as Greylag Geese and Mallard, as well as Chiloe Wigeon, Brazilian Teal, Coscoroba Swan and the iridescent Comb Duck
Chilean Flamingos
Birds of Prey: Red-legged Seriema are South America’s nearest relation to birds, known in the rest of the world as cranes. Striated Caracara, also known as Johnny Rook, are found predominantly in the Falkland Islands and small islands off Tierra del Fuego. Once abundant in numbers there are approximately only 500 pairs left in the Falklands.
Capybara – This is the world’s largest rodent. It is an excellent swimmer, with eyes, nostrils and ears set in alignment across the top of the head
Brazilian Tapir- One of the largest of three species to be found in South America, this one has the widest distribution. Its closest relatives are the rhinoceros and the horse.
Amazon Parrots & Macaws and Tic-Tac the Toucan
Spiders in the Spider Village
Guinea Pigs
Leaf-Cutter Ant Exhibit
Squirrel Monkeys – This small monkey of Central and South America lives in troops of up to 30-40 animals from mangrove swamps to 3,000 feet above sea level
Geoffrey’s Spider Monkeys – This species is distributed throughout Central America, from Mexico to Panama
Ring-tailed Coati & American River Otters
Marmosets – Capuchin Monkeys
Mara – the Patagonian Hare
The Rhea – the greater Rhea is one of South America’s largest birds
Collared Peccary – Also known as the Javelina or the Musk Hog, this is the smallest of the peccary species.

New for the month of August 2017 is www.CromerCamping.com. Pitch your tent and visit the zoo!

THE ZOO: 10.00am – 5.00pm. Please check our social media on Facebook and Twitter for animal updates @AmazonaZoo. Advance online ticket purchase only.