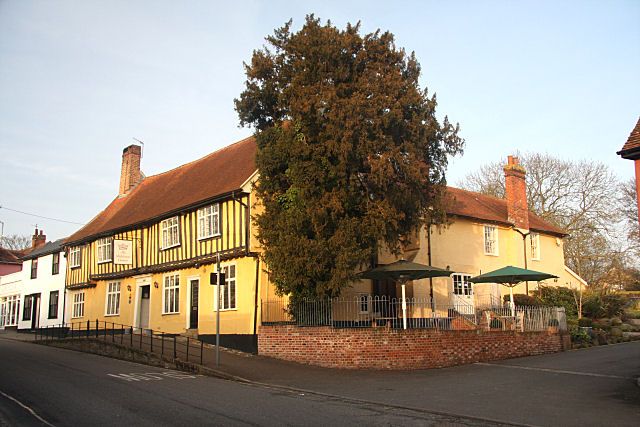 Bildeston is a large village, which in 1520 was an important centre for ‘blue cloth’.

The pleasant square is surrounded by colour-washed buildings and a fine Georgian brick house. At its centre is the Victorian clock tower built in 1864. The Bildeston Crown is an original 15th C. coaching inn renowned for its ghosts.

In the fields surrounding the village of Bildeston, a small number of Stone-Age flint tools have been found that show early hunter-gatherers came through this part of the Brett Valley.

People of the Iron Age have also passed this way. Two Roman roads crossed here so it is not surprising that Roman coins as well as scatters of debris from building and metal working have also been discovered.

Bildeston is one of sixteen place names in Suffolk that has a Danish personal name compounded with Anglo-Saxon tun. This indicates that Angles established a farming community here sometime in the sixth century and after East Anglia was settled by Danish soldiers as part of the Danelaw, a leader Bildr took over about the year 880. The oldest extant written record of Bildeston is in the Domesday Book of 1086.