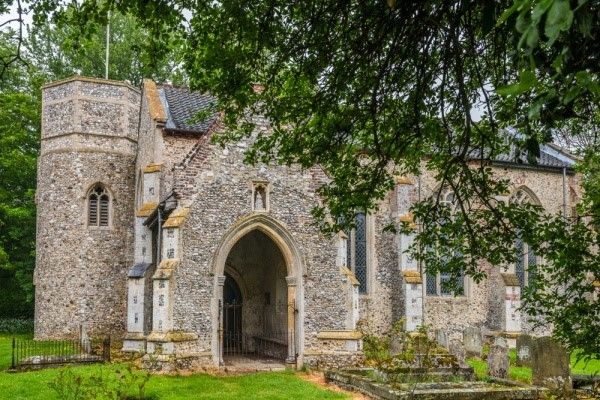 Brandiston is a small village and civil parish near the centre of the county of Norfolk, England, about two miles south-east of the small market town of Reepham, five miles south-west of the larger town of Aylsham and 10 miles north-west of the city of Norwich.

Brandiston’s Church of St Nicholas is one of 124 existing round-tower churches in Norfolk. It is redundant and in the care of the Churches Conservation Trust.

The south-east quadrant of the parish was occupied by a Second World War airfield, RAF Swannington. Although the airfield closed after the war and returned to agricultural use, parts of Guton Hall Lane to Swannington and the road to the east of the church still run over remains of the concrete runways.

There is a small common in the west of the parish, surrounded by cottages that were originally built to house labourers for Guton Hall and The Grove in Booton.

There are four almshouses, built in the 1850s and owned by the Brandiston Gurney Charity, established from a 16th-century bequest by William Gurney. Greenway Wood in Brandiston is named after Richard Greenway (1921-2009), a long-serving trustee of the charity.

The remains of a stump cross are on the eastern boundary of the parish, on the Cawston-Norwich road.