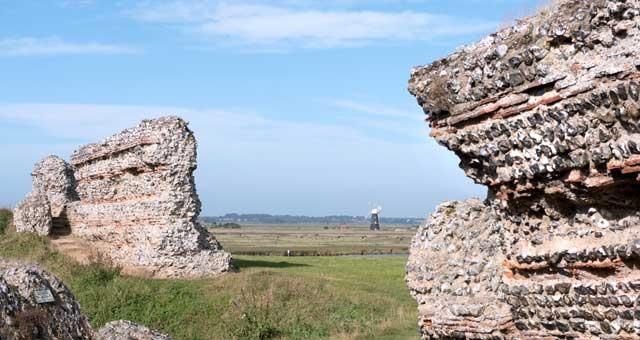 Burgh Castle near Great Yarmouth is a large village south of Breydon Water which takes its name from the third century Roman fort. A popular location with tourists staying at the nearby holiday parks.

Burgh Castle near Great Yarmouth is a large village south of Breydon Water and is a popular location with tourists staying at the nearby holiday parks. Burgh Castle is an excellent spot for both birdwatching and fishing and there are miles of scenic footpaths to explore.

There are a couple of pubs, with mooring available outside the Fishermans Arms and public moorings past Goodchilds Marine on the public staithe. Extra care should be taken when mooring here as it is very tidal. The Queens Head can be found in the village.

Set at the confluence on the Rivers Waveney and Yare, Burgh Castle has splendid views across the water and over Halvergate marches towards Berney Arms Windmill. Burgh Castle is where the Romans built a fort to protect their colony from attackers. The ruined remains of huge flint walks remain today and are one of Britian’s best preserved examples of Roman occupation in the British Isles. About 300 hundred years later, an Irish missionary named Fursey, established a monastery within the ruins of the Roman fort. He eventualy left East Anglia to setup another Monastery in France and a few years later attempted to return to Burgh Castle to see what had become of his monastery here, only to die on route. The monastery he founded at Burgh Castle survived until the middle of the 7th century when many of the monks were killed when attacked. Nothing remains of the monastery, but one of the windows in the lovely parish church of St Peter & St Paul is dedicated to St Fursey. The church also has a round Saxo-Norman tower dating back to the 11th century.

With it’s mix of history, naturally unspoilt areas and great local pubs and restaurants it serves as a tranquil base for your visit to the area.