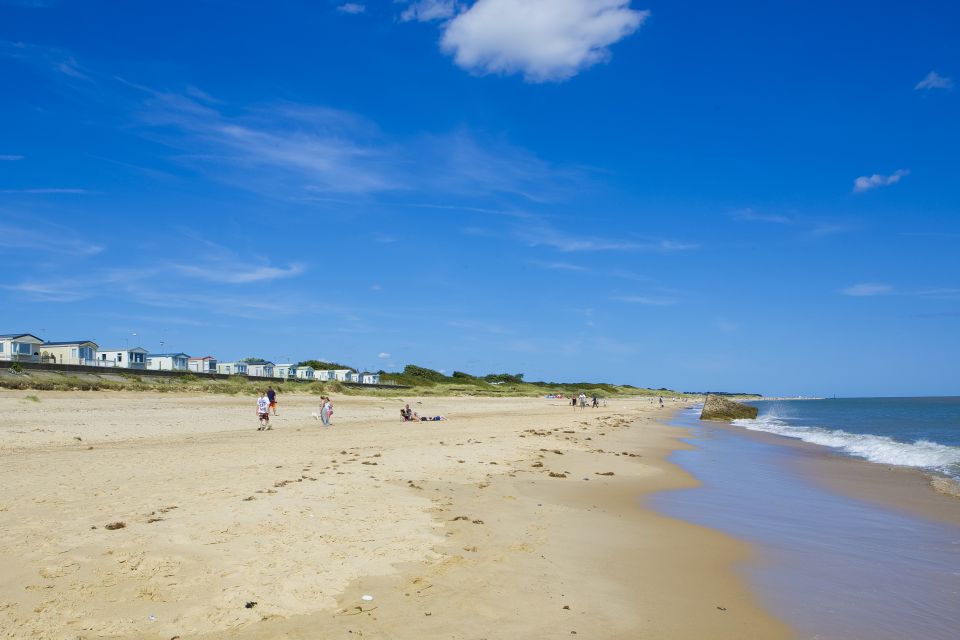 Caister-on-Sea near Great Yarmouth is a delightful coastal village located to the north of Great Yarmouth, boasting a good selection of shops, restaurants, pubs and holiday accommodation and fabulous beaches.

Caister-on-Sea, also known colloquially as Caister and formerly Caister-next-Yarmouth, is a large village in Norfolk in England, United Kingdom, close to the large town of Great Yarmouth. It is a seaside resort and busy holiday destination on the “Golden Mile”, with its main attraction being its sandy “Georgian Beach”. It is home to Great Yarmouth race course. At the 2001 census it had a population of 8,756 and 3,970 households, the population increasing to 8,901 at the 2011 Census. It used to be served by Caister-on-Sea railway station. There was also a Caister Camp Halt, opened in 1933 to serve the holiday camp mentioned below. However, both were closed in 1959, after which Great Yarmouth railway station, 4 km (2.5 mi) to the south, became the nearest station. The wind farm at Scroby Sands has thirty 2–megawatt wind turbines, 2.5 km (1.6 mi) off shore.

Caister’s history dates back to Roman times. In around AD 200 a fort was built here as a base for a unit of the Roman army and navy. However its role as a fort appears to have been reduced following the construction of the Saxon Shore fort at Burgh Castle on the southern side of the estuary in the latter part of the 3rd century. The name ‘Caister’ derives from the Anglo-Saxon word ‘ceaster’ meaning ‘Roman fort’

In the 1950s, a building near the south gate at Caister was excavated in advance of a housing development. These buildings certainly do not appear to be very military as they include a hypocaust and painted wall plaster as well as female jewellery, and it has been suggested that this building may have been an officer’s house, or possibly a ‘seamen’s hostel’ which may be a polite name for a brothel. The site appears to have been abandoned in the 5th century, but 150 Saxon burials have been found to the south of the enclosure. The remains excavated in the 1950s are now managed by English Heritage and are open free of charge to the public as Caister Roman Site.

There has been an offshore lifeboat in the area since 1791. It was used by a beach company to salvage ships wrecked on the sand banks. Between 1856 and 1969 lifeboats were operated by the RNLI. In the 1901 Caister lifeboat disaster, nine crew were lost while attempting a rescue during heavy seas. At the time it was said, “If they had to keep at it ’til now, they would have sailed about until daylight to help her. Going back is against the rules when we see distress signals like that”.

This response was translated by journalists to become the famous phrase “Caister men never turn back”. A monument to the men lost in the disaster bearing this inscription stands in the village cemetery, unveiled in 1903 and was listed Grade II by Historic England in 2020. A pub called the “Never Turn Back” is named after the incident.