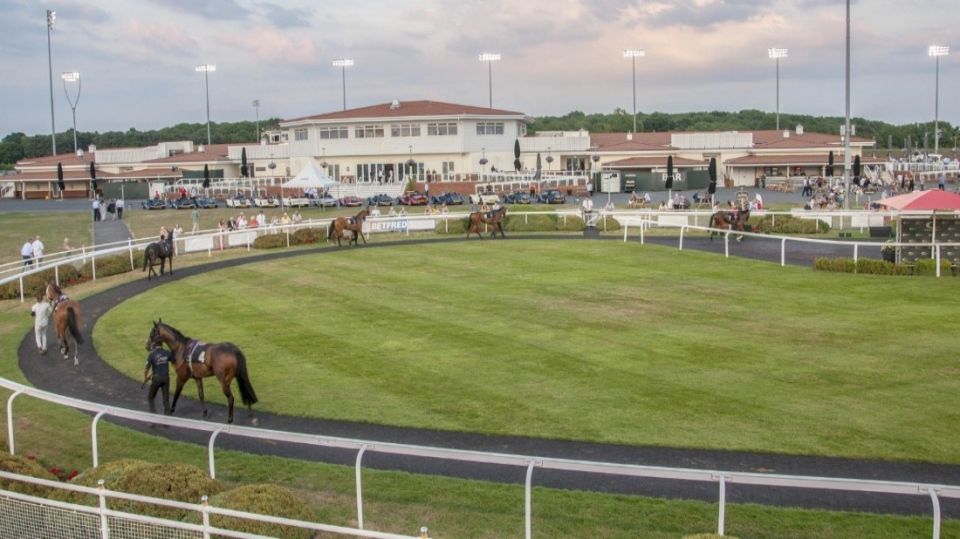 Britain’s newest racing venue offers thrilling all-weather racing under the mesmerizing light of its champagne fluted floodlights and the venue also highlights its versatility with a huge variety of non-raceday events. With fantastic facilities positioned in 150 acres of land, the venue is set in the Essex countryside and a wonderful setting for racedays, concerts and venue bookings.

Built on the site of the previous Great Leighs racecourse, Chelmsford City is not only the newest racecourse in Britain, but is also one of only 5 fully floodlit all-weather tracks in the UK. With the distinctive shape of the bespoke made Champagne-flute shaped lights, the racecourse pioneers sleek design, the newly constructed Grandstand having been short-listed for an architectural award in 2016.

The course opened for racing on 11th January 2015 with the first public raceday on 1st February in the same year. Since then it has gone from strength to strength, offering a huge variety of raceday and non-raceday events including, but not limited to, live music concerts, family fun days, conferences, wedding exhibitions, food festivals, obstacle races and Arabian race fixtures.

2015 saw the course host its inaugural major music event when Madness played an outdoor concert after racing. A great event saw a crowd of around 7,000 guests enjoy a full evening of racing followed by some rousing renditions of some of the best Ska hits of the 1980’s. With a total attendance of approximately 80,000, the first year of operation was a great success and provided a platform from which the racecourse has grown year on year to date by offering significantly higher prize money then its peers across its 58 scheduled fixtures, the course also attached plenty of the top quality horses in its debut year. Chief among those was Covert trained by Hugo Palmer. She won her first race here before landing the Irish Oaks Classic race just a few months later. 2015 finished on a high when Channel 4 Racing covered the fixture on 27th December, following the abandonment of some jumps fixtures – the huge advantage of boasting a top of the range all-weather surface!

The second year of quality racing at Chelmsford City saw not only some great live music from the likes of Simply Red, Rick Astley and Jools Holland, but also a huge increase in attendance, a more prominent local presence and some top-class Arabian horse racing. In a gesture of huge confidence from the racing community, the course was selected to stage the prestigious rearranged Greenham meeting following the decision to call off the original Newbury fixture. This card included three group races and it was a fantastic accolade for such a young track. It was a day handled with aplomb by all the staff at incredibly short notice.

2017 began with a bang with hugely successful early sales for all three concerts as well as standard race fixtures. In addition to big name bands such as Boyzone playing at the Essex course over the summer, the annual Ladies Day was a sell out, and showing it has already become a focal part of the Essex social calendar.

2018 is best described as a year of records and firsts. As well as staging unique concerts like Hacienda Classical and hosting yet another Ladies Day sell-out, the course held its first ever Gentlemen’s Day during the summer. On the racing front, a record 63 scheduled fixtures provided and amazing £5.2 million in prize money and saw the staging of Britain’s most valuable evening meeting ever on 20th June. This included the track’s first ever listed race, the Queen Charlotte Stakes. Chelmsford’s first ever £100,000 race – The Chelmsford City Cup – soon followed.

Three Racecourse Association Excellence awards, and numerous other shortlistings, and projected prize money of over £5 million throughout the year show that Chelmsford City really has developed from the young pretender to a leading contender.

CAR
Chelmsford City Racecourse is situated in Great Leighs, 5 miles north of Chelmsford in the heart of Essex and offers free parking to all our customers.

Surrounded by picturesque countryside, the 150+ acre racecourse site has excellent transport links via the A131, A120 and M11. The car park is situated at the Main Entrance off the A131 bypass. Disabled parking is available with Blue Badge holders given forward parking in the car park nearest to the Ticket Office. This parking area is subject to capacity on the day and is allocated on a first come, first served basis only. We have 30 dedicated disabled parking bays directly adjacent to the ticket office which provide closer proximity to the racecourse entrance. Blue Badges must be clearly displayed at all times. For those with disabled passengers, we allow and recommend drivers drop off guests before parking in the main car park. All car parking is at the car owners risk.

The postcode for the main car park is CM3 1QP.

WHERE TO STAY
Chelmsford City Racecourse is positioned in an ideal spot between Braintree and Chelmsford, near the town of Great Leighs. There are various accommodation options available.