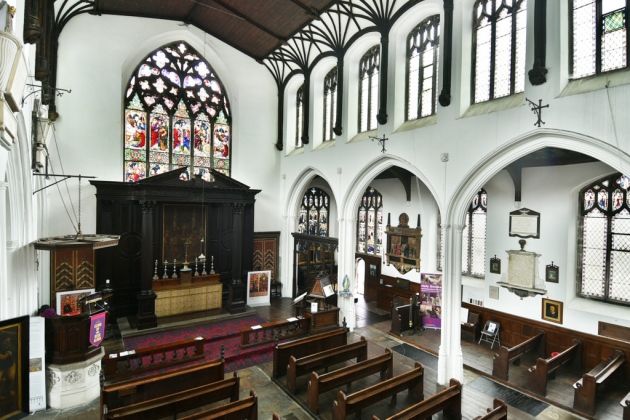 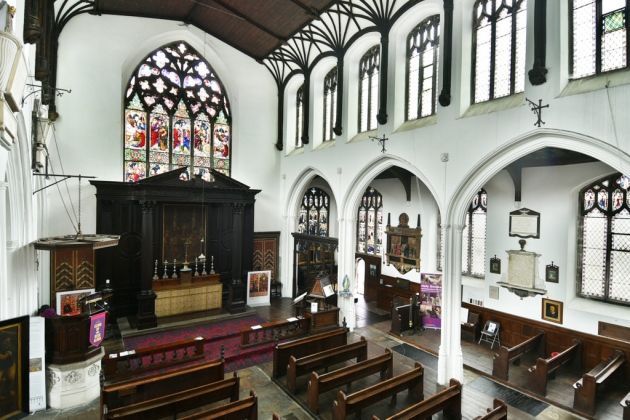 The handsome flint tower of St John’s rises above Maddermarket in the city centre. The best view of it is from the north, where its tower stands over Maddermarket Alley, affording one of the city’s most attractive townscapes.

The present church was built in the 15th-century when Norwich was one of the wealthiest cities of Europe. Squeezed ingeniously into a cramped site, St John’s is rather oddly proportioned, being almost as wide as it is long.

It is believed that an original chancel may have been demolished as part of a road-widening scheme when Queen Elizabeth I came to visit Norwich. It survived a gas explosion in 1876 during a choir practice that stunned the rector, singed the choirboys and shattered windows and furniture.

Today’s sumptuous stained-glass windows are Victorian and 20th-century replacements and the close set windows in the upper level flood the church with light. The church’s square interior is filled with marvellous monuments, from elegant plaques to detailed little figures in Tudor dress including one to Nugent Monk who founded the nearby Maddermarket Theatre and was one of the earliest people to recreate a Shakespearean stage in the 1920s.

All around are rich furnishings -– part of an interesting and eccentric collection assembled by William Busby (rector from 1898 to 1923). He sought out, or commissioned, a whole variety of items to beautify his church, including the magnificent Georgian canopy over the high altar and the altar screen in the lady chapel.

St John’s is one of three of our churches in Norwich, and features in our finest churches shortlist.