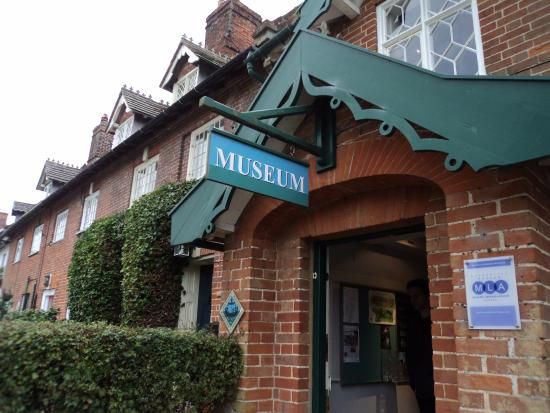 The Museum Story
The Museum was founded on the legacy of the original borough, which includes the mace and seal used by the aldermen and councillors of Dunwich.
This delightful and charming museum will keep you and your children entertained from a short visit to a whole afternoon.
Extended and refurbished in 1998 after a generous grant from the National Lottery it has won numerous awards including the coveted Gulbenhian Prize.
The Reading Room and Museum Charity was created in 1952 to continue the work started by The Dunwich Town Trust in preserving the history of the Town. The Reading Room is the village hall in Dunwich, and it serves the community in many ways, as a meeting place for local groups, coffee mornings, art classes and private functions. It serves as meeting room for the Dunwich Parish Meeting, the Dunwich Town Trust and often the Dunwich Parochial Church Council.

We are currently proceeding to change the charitable status of the organisation into a Charitable Incorporated Organisation, and combine the work of the Reading Room and Museum into The Dunwich Community Heritage Centre.

Whatever Happened to Dunwich?
Over the centuries Dunwich has been a Roman fort, the capital of a Saxon Kingdom and the base from which St Felix, the first Bishop of Dunwich, converted East Anglia to Christianity.

By the 11th century it was one of the greatest ports on the east coast, the tenth largest place in England, a crusader port, a naval base, and a religious centre with many large churches, monasteries, hospitals, grand public buildings and even a mint. Its citizens grew wealthy from trade, shipbuilding and a seventy vessel fishing fleet. It had one sixth of the population of London and two seats in Parliament. All of it has been lost to the North Sea except for the ruins of the 13th century Franciscan friary on the edge of the cliff and Leper Hospital chapel in the present churchyard.

Dunwich is now a tiny village of barely more than 120 people and a few offshore fishing boats, a friendly 17th century pub, a well-known beach café and of course, a museum devoted to its fascinating history.

During the week, the manager, and at weekends, local volunteers give you a warm welcome and a mass of information about the story of Dunwich.

The museum was founded on the legacy of the original borough, which includes the mace and seal used by the aldermen and councillors of Dunwich.

From Melton station it is 9 miles to Dunwich Underwater Exploration Exhibition.