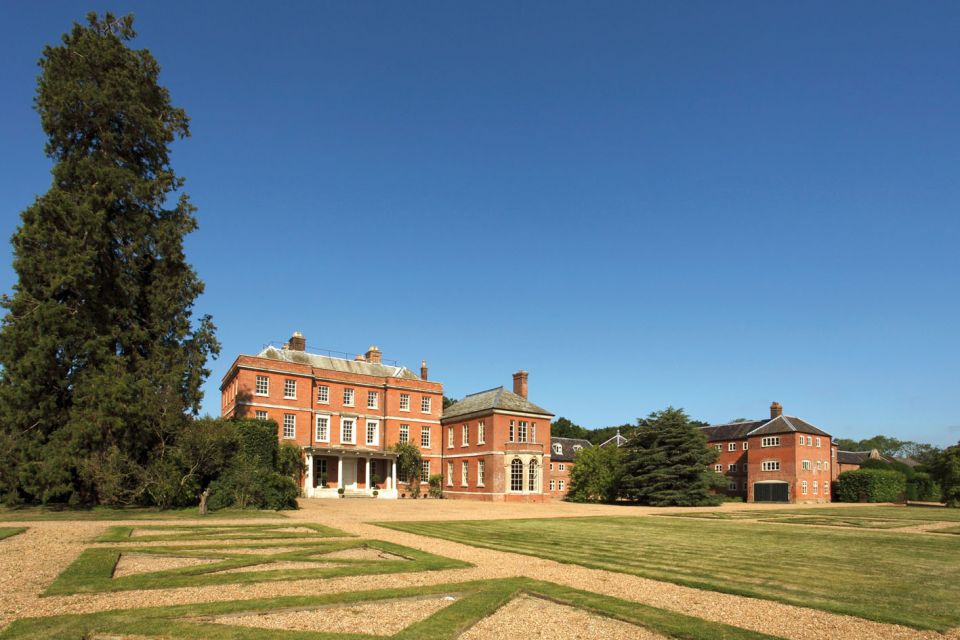 Earsham Hall is one of the finest country mansion houses in Norfolk. It has a rich and varied history dating back in part to the 15th Century.

It has a rich and varied history dating back in part to the 15th Century.On the evidence of old maps, Earsham Hall formerly consisted of three long timber-framed buildings set at right angles to each other. Two of these remain today, although both were faced in brickwork in the early 17th century. The Hall was known to have an extensive Deer Park surrounding it from early times.

The first owners on record were the Throckmorton family and then Robert Gooch. It then passed to Leonard Gooch (probably his son) and finally to Leonard’s daughter Ann. Ann married a gentleman called John Buxton who was an amateur architect and in 1707 to 1710 he built the Queen Anne block (extension!) adjoining the much earlier building. The brick façade was added after this so the Hall looked more in keeping with its different parts.

John and Ann sold this modernised Hall to Colonel William Windham and his wife Ann (Tyrell) in 1720. Their daughter Catharine eloped with the son of the Apothecary in Bungay, John Dalling, much to their displeasure, but their surviving son, William Windham (1706—1789), became Comptroller of the Household of HRH The Duke of Cumberland, son of George II. William and his wife Mary, Countess of Deloraine, made many improvements to Earsham Hall and employed the young architect Sir John Soane (whose work includes the Bank of England and 11 Downing Street) to convert the Orangery into the “Music Room”, to design some fabulous fireplaces and to redesign the kitchens in the Hall, with the use of top-lighting for which he later became famous.

Around 1750 a single storey wing was added to the north-east elevation, and it is thought to have been in honour of the Duke of Cumberland who came to the estate to hunt deer, and after whom our grand dining room is named.

The Hall then passed to cousins and their descendants (to avoid it being passed to the Dalling side of the family with whom they felt improperly linked through the elopement!) However, the Hall did finally pass to Catharine and John Dalling’s grandson Sir William Windham Dalling. Sir William died childless in 1864 leaving no children and he passed the Hall under a Trust to his nephew John (“Jonny”) Meade (1812—1886), the son of Louisa and Hon Robert Meade.

After Jonny died in France, the Hall passed to his son John Percy Meade and his wife Helena Frances (Walsh) who reinstated order to Earsham Hall and made vast improvements to it both visually and as a business.

John and Helena’s son John Windham Meade (later known as the Major) inherited the Hall in 1919 although decided to let the Hall rather than live there himself. From 1920 until their deaths, Americans Cecil Henry Oliverson and his invalid sister Laura rented the Hall. It was during their stay that Evacuees also lived at Earsham Hall.

From 1948 until 1973 the Hall was let as a Boarding and Day School for boys from 11-18 years old. It is still a great relief that the building still stands knowing the escapades the boys got up to…!

In 1973 the financial and political pressure was too great and the school closed down. For the first time in 250 years the hall was put on the market and was sold by auction in 1973 but sadly fell into a state of disrepair.

The Derham family bought the Hall in 1976 with the aim of preserving and renovating the building. Rupert Derham purchased the Hall in 1991 at just 22 years old and today runs it with his wife Annabel and their children Oliver and Sophie. The Hall itself is also home to the extended Derham family and incorporates three generations under one roof!