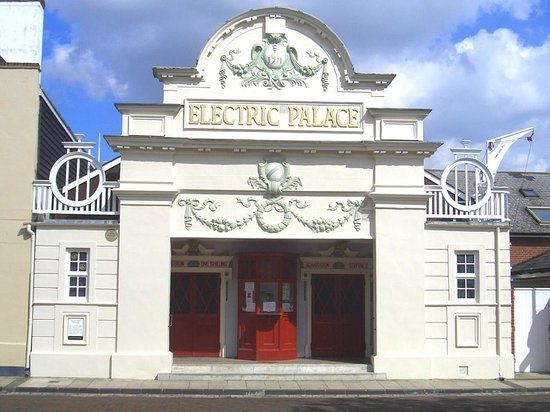 From humble beginnings as a cart shed, stables and garage the skilful conversion now includes stalls and a circle with 70 seats plus space for a wheelchair. There is a box office, a kiosk, two WCs, a loop system, organ and air-conditioning. The doors open for film evenings around one hundred times a year, including National Theatre Live screenings.

Programme
The Electric Picture Palace shows films in ‘Seasons’ throughout the year (Spring, Summer, Autumn and Winter Seasons), with a short break in between each Season. Southwold Film Society members receive a printed programme/newsletter ahead of the start of each Season and can book seats in advance in person, by post or by telephone. Seat prices are normally £6 Stalls, £7 Circle, £15 Royal Box (two seats). Seats for National Theatre Live are £10. If you are not a member (£10 per year), nor are able to come as a guest of a member, not to worry as membership is available just for the Season (£3). Membership entitles you to bring a limited number of guests. Contact the Box Office for full details.
The programme is also displayed at the Electric Picture Palace in Blackmill Road, Southwold – see its location on the Southwold town map.

Tours of the Electric Picture Palace
Tours last about an hour and are usually conducted at noon on certain Saturdays. Cost is £10 adult and £5 child. Check with the Box Office for details of these and to discuss Special Tours if under 5 people.

THE SOUTHWOLD FILM SOCIETY
The Southwold Film Society, formed in 1997, tries to capture the essential atmosphere of traditional British cinema-going showing classic films old and new and is a registered charity (No. 1080324). Any operating cash surplus will be used for the charitable aims which include local film-making. New members welcome.

The Box Office is open Tuesdays 10:30am – 12noon throughout each EPP film season.