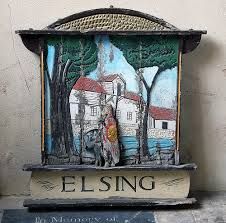 Elsing is a village and civil parish in the English county of Norfolk. The village is approximately 5 miles miles north-east of the town of East Dereham and 12 miles north-west of the city of Norwich. The nearest village is Lyng, 1 mile to the north-east.

Elsing in the Domesday Book is listed as “Helsinga”; this name derives from an Old Scandinavian person name with ‘ingas’, meaning a “settlement of the family or followers of a man called Elesa”. His image is depicted on the village sign together with a hunting hound.

At the Norman conquest, the manor was given to Earl Warren and then passed by inheritance to the Foliot, Hastings and Brown families.

In the medieval era Elsing was a town with a population of over a thousand, and had its own market and guildhall.

St Mary’s Church, built in 1347, has the widest pillarless nave in East Anglia. There is a brass commemorating the life of Sir Hugh Hastings, the lord of the manor.

The Hastings family built the moated Elsing Hall in 1470. The hall incorporates a priest hole used during the 16th century to hide Catholic priests from persecution.

Other historic landmarks include the gardens at Elsing Hall, the Guildhall, the Rectory, The Mermaid Inn public house (c.1540), and Elsing Mill on the River Wensum.