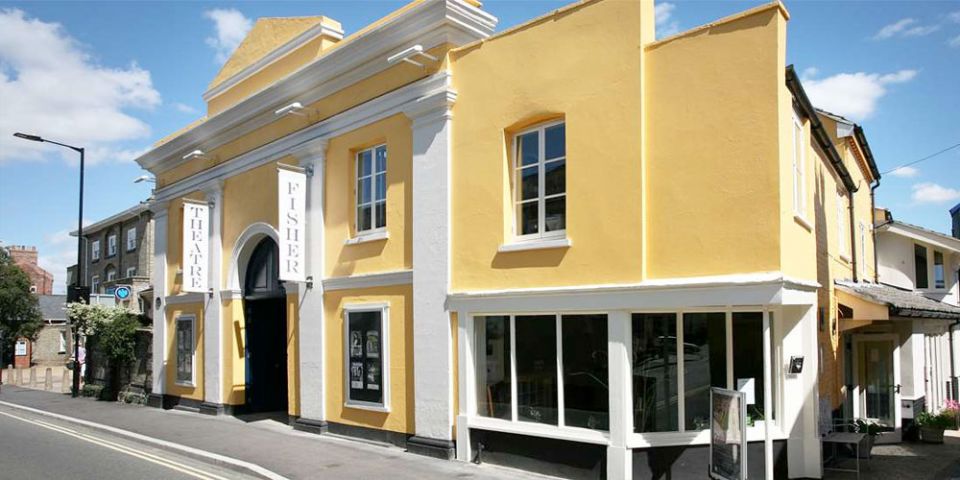 The Fisher Theatre in Bungay, Suffolk, re-opened in September 2006 and is now a fantastic venue for entertainment, workshops & refreshments. The Theatre hosts plays, musical events, childrens’ entertainment and much more!

The Fisher Theatre, Bungay
Was first opened on 28th February 1828 with a performance of ‘The Belle’s Stratagem’. The theatre was one of thirteen designed and built across East Anglia by David Fisher, serving the circuit of Fisher’s company, ‘The Norfolk and Suffolk Company of Comedians’.

Fisher’s company, which was to a great extent made up of members of his own talented family, would visit each theatre in turn for two months, putting on a series of highly professional productions. They would then move onto the next town in the circuit, returning two years later.

If you go down the spiral staircase to the atmospheric cellar you can get a sense of how the late Georgian population of Bungay was stylishly entertained. You will find a reconstruction of the pit seating area complete with ‘audience’, and many historic items found during a ‘Bungay Time Team’ dig in 2004. Even cheaper than squeezing on to pit benches, were bench seats high up in the gallery at the Broad Street end of the building. The most spacious seats were provided for the gentry, in two tiers of private boxes. While local townsfolk queued eagerly down the side of the building, ready to squash into the pit or the gallery, the gentry would enter through the big front doors, personally welcomed by David Fisher.

Touring theatres were badly affected by the coming of the railways and in 1844 the Bungay theatre was sold. For most of the 19th Century it was the town’s corn Hall and a venue for meetings. Later it became Bungay’s first cinema and was used for a variety of entertainments and commercial enterprises, including a steam laundry for many years, and ending the 20th Century as a textile warehouse.

The resurrection of this ‘house of entertainment’ has been a long story in itself. Bungay Arts and Theatre Society (BATS) was formed in 1995 by five local residents convinced that the town needed an Arts Centre, and that to establish one would also help regenerate this ancient market town.

Attention was quickly focused on the old Georgian theatre building, and after much fund-raising the building was bought for the town in 2001. BATS, now a charity, began the daunting task of raising sufficient funds to transform a very dilapidated historic shell into a high-tech centre for all arts. An army of volunteers, a large board of Trustees, loyal audiences clutching blankets and hot water bottles; hard won grants; generous donations and huge helpings of stubborn determination and toil finally opened the big blue doors on 29th September 2006 as a registered not-for-profit charity receiving no on-going revenue funding. The running costs of the building, productions, staffing and maintenance are met solely from income generated by the activities in the theatre.

There are three separate areas licensed to hold Weddings and Civil Ceremonies.

It is difficult now to imagine life in the area without the vibrant fisher theatre. It’s at the heart of the community, providing an unusually broad programme of arts events, and has won a number of awards. The high-tech design features impress audience and performers alike, and yet the Georgian heritage is preserved and cherished.