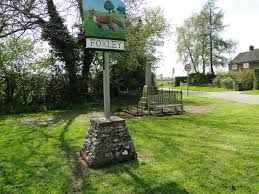 Foxley is a village and civil parish in the English county of Norfolk. The village is about 15 miles north-west of Norwich and 9 miles south-east of Fakenham.

The villages name means ‘Fox wood/clearing’.
A Norfolk County Council report discusses the archaeology of the Parish and states that there is evidence of a settlement here in the Saxon period. “The earliest prehistoric finds date to the Neolithic … there was activity in the parish from much earlier than the Saxon period”. The oldest building is the former Chequers Pub (NHER 19249) from the 1700s but a survey found carpenters’ marks in the interior from 1624.

The same report also mentions the site of a WW II plane crash (NHER 20528), involving two bombers of the US Air Force that were stationed at Wendling, Norfolk.

Grade II listed structures within the community are the Foxley War Memorial, the Church of St Thomas and Foxley Lodge, a former rectory constructed in the early 1840s. The style of the Lodge is Georgian, described in 1984 as “brick with slate roofs. Roughly square in plan. 2 storeys. 3 bays to each of 3 facades”. The manor was restored in the 1930s; the property was operated as a dairy farm until some time before 2017. The property includes the seven bedroom manor, outbuildsings, orchards, and three gardens which were planned by Verity Hanson-Smith.

The current Church of St Thomas was first built in the 1100s, probably on the site of a previous church from the Saxon period. The structure was extensively modified through the 1400s; some additional work was done in the 1600s and in the early 1800s. In the Listing Report of 1960, the church was described as “Flint with ashlar and some brick dressings. Slate and pantile roofs”. In 2018, the Church of England was hoping that the care of this church would be accepted by The Diocesan Churches Trust.

A five-minute drive from the village centre, Foxley Wood is a site of special scientific interest and the largest remaining area of ancient woodland in Norfolk, England. Operated by the Norfolk Wildlife Trust, parts of the 123 hectare (300 acre) reserve are thought to be over 6000 years old, dating from the end of the last ice age. The reserve is a Nature Conservation Review site and a National Nature Reserve.