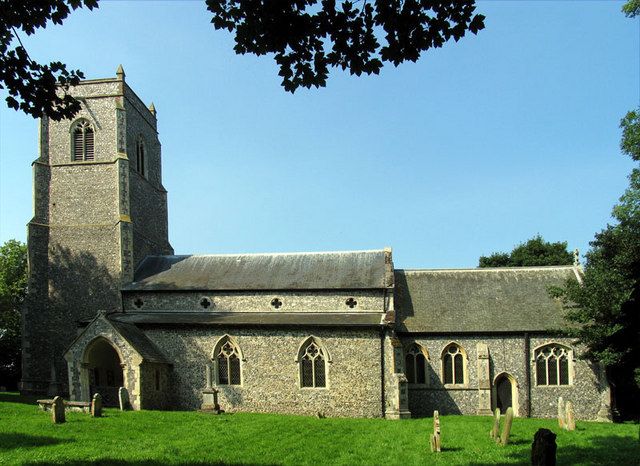 Frettenham is a civil parish in the English county of Norfolk. Known in the Domesday Book as ‘Fretham’, Frettenham is located six miles north-east of Norwich, surrounded by countryside. The village is well known for its rich farmland. It covers an area of 6.33 km2 (2.44 sq mi)

The name Frettenham is thought to originate from a settling Dane called Freyde in the 9 th century. (Freyde means “the Dane”) There were plenty of young Danish fighters who settled in the surrounding area at this time.

There is local evidence of earlier road building by the Romans but nothing to substantiate anything for Frettenham.

In the domesday book of 1086, the village name had become Fretham and by 1202 Fretenham, the ham is a anglo-saxon word for tribal settlement.

Over the proceeding years the ownership of Frettenham changed hands several times often being included with the lands of Spixworth, Hainford and Crostwick, depending on your allegiance to the crown at the time. There are some Manorial records dating from the 1700’s at the Norfolk and Norwich Records Library.

The church for Frettenham “St Swithins” dates back to the early 1300’s and the first rector is recorded as “one Thomas de Warden”. It is situated outside of the present village due to the great plague which moved part of the early village further away from the burial area and possible contamination at the time.

The village once had several Blacksmiths shops, a chapel and a post office come shop. The school, which dates back to 1852, is still going strong and now incorporates a nursery next door in the Jasmine Cottage. There is a pub called “The Rose and Crown,” though I at present do not know how long it has been here.

The village has grown slowly in size over the years with the population recorded in 1851 of 255 people living in 53 houses, the population today is approximately 700 living in about 300 houses and will not be allowed to grow to much more under present planning guide lines.

People have been living in Frettenham since the Stone Age. Their belongings have been found in many places in the parish. Some of the remains from the past are the barrows near Court Hill, the pre-Roman road between Spixworth Bridge and Coltishall Bridge, and the top end of Buxton Road which was part of the Roman road to Brampton.

In Roman times the Iceni people here suffered when the Romans took revenge for Boudicca’s rebellion. After the Romans left there was probably an Anglo-Saxon settlement here-its people would have owed allegiance to King Redwald who was buried at Sutton Hoo. After the Danes arrived to settle in the east of England someone nicknamed Fraeta (meaning “wanton”) gave his name to the village.

William the Norman, the greatest pirate of them all, brought Frettenham into history with its entry in the Doomsday Book, the best-known tax return of all time. After that the records show a saga of lawsuits and changes of ownership among lords great and small. One of the more important ones was Lord Suffield (family name Harbord) who in the mid-1840s enclosed most of the common land at the centre of the village. Enclosures took away the rights of ordinary people to graze their animals on the land , and were common practice. In Frettenham Lord Suffield gave those who had lost their rights half an acre of land to grow food. This was not usual-Arthur Mee, in his Counties of England, called Frettenham “the fortunate village”.

The Mill was built in 1880, but closed in 1900. It was not the only mill- there was a smock mill in the big field along Mill Road.

The Pit was opened during the Depression in the 1930s to give work to unemployed villagers, and extended to provide ballast for the runways at RAF Coltishall.

At this time most of the housing in Frettenham was in School Road and the eastern part of Post Office Road. The new Post Office was built in 1935. The village expanded slowly until the 1960s when large-scale building took place along Post Office Road, Mill Road and Buxton Road. The middle of the triangle was filled in by Mayton Avenue.

The well at Well Green was filled in sometime during the 50s and 60s and the wrought iron “cage” protecting the tree was erected by Mr Page to commemorate the Millenium.

A1970s plan by Norfolk County Council to use the Pit for household waste was dropped when councillors came to look at it- the new Freyden Way wasn’t on their sit plan! Finally Birbeck Way was built in the 1980s and the village was more or less as we see it today.

May 8 th 1944 – The Belle of Boston an American bomber having taken off from St Faiths crashed on Court Hill, Frettenham where sadly six crew members died. Remarkably some of the crew survived and Derek Hewitt a Frettenham resident helped in their rescue. Many years later his son Trevor Hewitt and Geoff Woods researched and excavated the site recovering many items from the crash. As a result a museum has been set up at New Farm Products on Buxton Road. May 8 th is now an annual holiday in Boston, USA which has been named Hewitt Day.