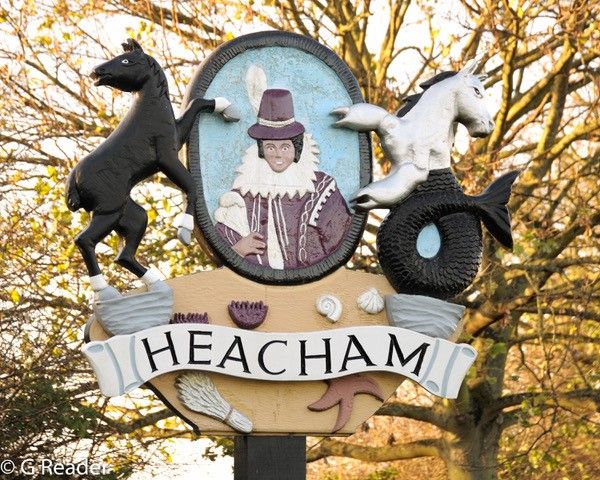 There is evidence of settlement in the Heacham area, for around the last 5,000 years, with numerous Neolithic and bronze age finds

There is evidence of settlement in the Heacham area, for around the last 5,000 years, with numerous Neolithic and bronze age finds, although the origins of the present village were probably from around the 5th century, with the Anglo-Saxon invasion.

In 1085 the manor of Heacham was given by William de Warenne to a cell of Cluniac monks to pray for the soul of his late wife Gundreda. After the dissolution around 1541, the manor passed to Thomas Howard, 3rd Duke of Norfolk.

The Church of St Mary the Virgin is the oldest surviving building in the village. It dates from 1230 and is Norman in style. In the cupola on the tower hangs a bell dating from about 1100, making it the oldest in East Anglia.

Heacham has historic ties to Pocahontas who married John Rolfe of Heacham on April 5, 1614 at a church in Jamestown, Virginia. The Rolfe family home, Heacham Hall, burned down in 1941.

Heacham started to become popular as a seaside resort with the Victorians due to the opening of the railway line between King’s Lynn and Hunstanton in the early 1860s.

Today the north Beach has an amusement arcade, café and fish bar and beach huts for hire. South Beach has its own café/gift shop and both beaches have public toilets.

In the village, shops include Heacham’ s own “department store”, Bradfield, two supermarkets, two butchers, a bakery and a selection of smaller shops and restaurants. The village has three pubs, The West Norfolk, The Fox & Hounds and The Bushel & Strike.