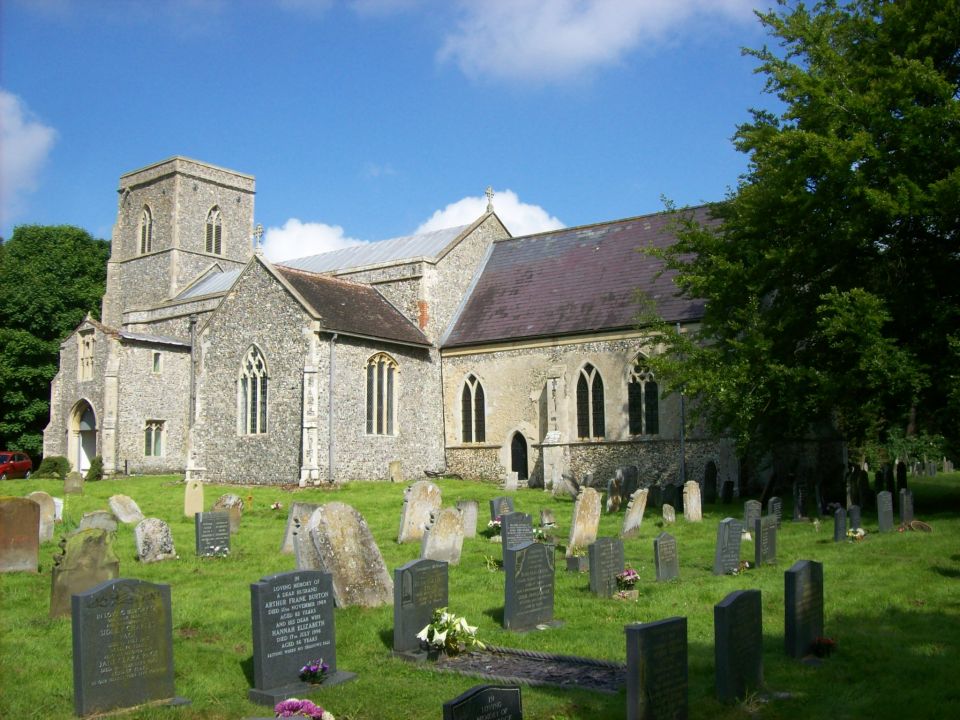 Hevingham is a village and civil parish in the Broadland district of the English county of Norfolk.

The village name has Old English origins and is translated as homestead of the people of Hefa.

The village is documented in the Domesday Book where it is recorded as Heuincham “where one freeman, a priest, is recorded as holding 40 acres in alms for the King”. The village of Rippon or Ripton is noted within Hevingham but this village was deserted during the medieval period. Its exact location is unknown.

HEVINGHAM is a considerable village and parish, three miles south of Aylsham, nine miles north-west of Norwich, having 893 inhabitants, and 2855 acres of land, belonging mostly to Robert Marsham, and William Repton, Esqrs., the former who was lord of the manor of Hevingham and Cats-cum-Cricketots, and the latter is lord of Hevingham-with-the-members-of-Marsham, which was anciently held by the Bishops of Norwich… The Church (St. Botolph,) has a nave, chancel, tower, south transept, and a handsome porch. It has inscriptions to the families of Hobart, Thetford, Deynes, Leigh, Scambler, and a curious sexagon font, with mutilated figures under florid Gothic arches”

There is evidence of Roman activity. A Roman iron-working site was found during ploughing and was subsequently excavated. Archaeologists also investigated pottery kilns in the parish in the 1950s. Five kilns were recorded. These produced cooking vessels and other pottery during the 2nd century. The names of two potters who worked at the site – INGENU and ESAMI are recorded on the stamps they used on their pottery. There also extensive finds recorded from throughout the Saxon period.

With its red brick 16th century manor house, Park Farm is the former site of a moated bishops’ palace. Built in 1250 by Walter de Suffield, Bishop of Norwich and used by subsequent bishops until the ownership of the land was passed to the Crown by Bishop Nix in 1531. Earthworks of the moat can still be seen and many artefacts have been found on the site by the current landowner. Adjacent Hevingham Park, a medieval wood may have been a deer park connected to the palace. There is also a massive bank and ditch marking the parish boundary.

There are records of a post medieval windmill or Smock mill which stood in the North east part of the village, to the west of the Cromer road and was sold at auction ‘to be dismantled’ in 1869.

Other notable historic buildings include – Pound Farm House, built in 1675 on The Street/Halls Corner, The Free School (Old School House) built by John Hall in 1726 on the Cromer Road, Avenue Farm House – built in 1835 and Hevingham Primary School, built in 1875 with a capacity of 100 students (currently 98 enrolled).

The site of a camping ground, or recreation field, where ‘Camping’ a forerunner to modern day Association football was played may be recorded in the modern names of Camping Beck and Camping Bridge.

There is a complete World War II pillbox located in the south-western corner of Buxton Heath, itself a site of special scientific interest.