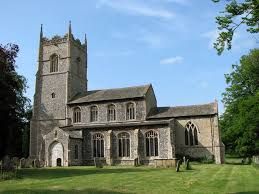 Hilborough is a village and a civil parish in the English county of Norfolk. The village is 5.5 miles (8.9 km) south of Swaffham, 25.4 miles (40.9 km) west-southwest of Norwich and 93.2 miles
The village straddles the A1065 between Swaffham and Brandon. The nearest railway station is at Brandon for the Breckland Line which runs between Cambridge and Norwich.

Hilborough has an entry in the Domesday Book of 1086. In the great book Hilborough is recorded by the name Hildeburhwella. The main landholder was William de Warenne. The main tenant was named as William. The survey also notes that there were three mills, and five beehives. The ancestors of Admiral Nelson, including the Admiral’s father, the Reverend Edmund Nelson, who left for Burnham Thorpe shortly before Horatio was born, were rectors of the parish church of All Saints at Hilborough between 1734 and 1806.

In the 1990s the Hilborough Estate was bought by Hugh van Cutsem, who built a neo-Palladian mansion designed by architect Francis Johnson. The efforts of the van Cutsem family and their estate workers resulted in the Hilborough Estate becoming one of the country’s leading wild-bird shoots, winning awards for their conservation work.

The family of Admiral Nelson. Nelson’s grandfather, father, uncle-by-marriage and his brother were all rectors of All Saints parish church in the village. As a young boy Nelson stayed with his uncle and grandmother in Hilborough. After the battle of the Nile, Nelson was created Baron Nelson of the Nile and Hilborough.