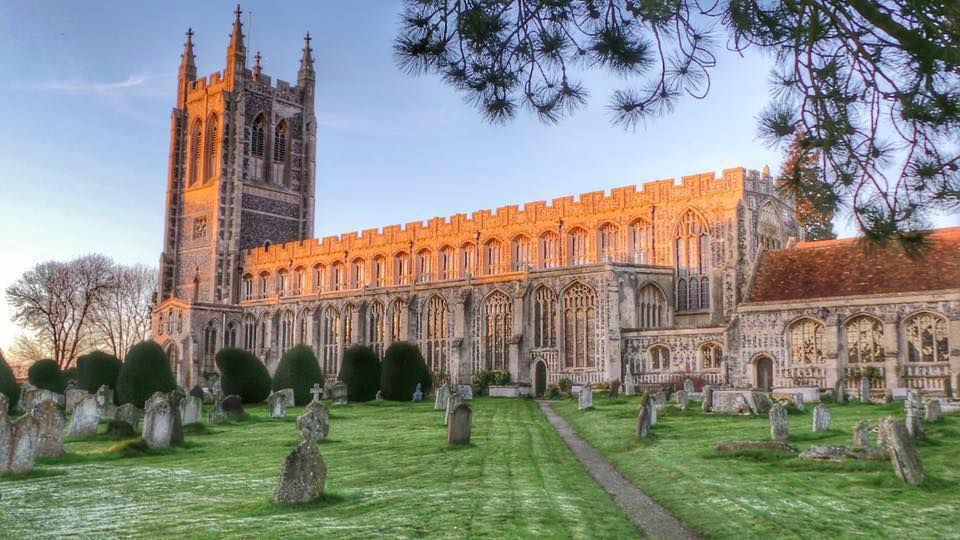 Holy Trinity Church is one of the great Suffolk wool churches which stands on a hill at the north end of the village of Long Melford. It is widely acknowldeged to be one of the most magnificent parish churches in the country. Indeed a quick scan of our visitors’ book reveals that even hardened tourists are taken aback by the building’s beauty and the peace they experience when visiting a site where Christians have worshipped and prayed for over 1000 years.

Whereas documents reveal that there has been a church on this site for at least 1,000 years, the church was almost entirely re-built in the 15th century at a time of growing prosperity among the local cloth merchants. The main body of the church was completed in 1484, with the Lady Chapel being completed in 1496. The only parts of the structure dating from before this time are the five bays of arcading at the west end of the nave, which are considered on architectural grounds to be about a century earlier, and possibly the porch.

The original tower of Holy Trinity was destroyed by lightning around 1710. A Georgian brick and plaster replacement was built around 1772 however this was considered rather unappealing and not in keeping with the rest of the building. The present tower, dating from 1903, was therefore built around this older tower. It was built as part of Long Melford’s commemoration of Queen Victoria’s Diamond Jubilee and stands 118 feet in height. It is constructed of flint and flush work, consisting of dressed stone and flints from Brandon and nearby Acton. The four pinnacles commemorate Queen Victoria, Edward VII, Alexandra and the Revd. C J Martyn – a Victorian minister who oversaw a substantial renovation of the church.

We are very fortunate to have many panels of the original medieval stained glass which is over 500 years old, including the the Rabbit (Hare) window which symbolizes the Trinity. We also have many other stained glass windows covering more recent centuries.