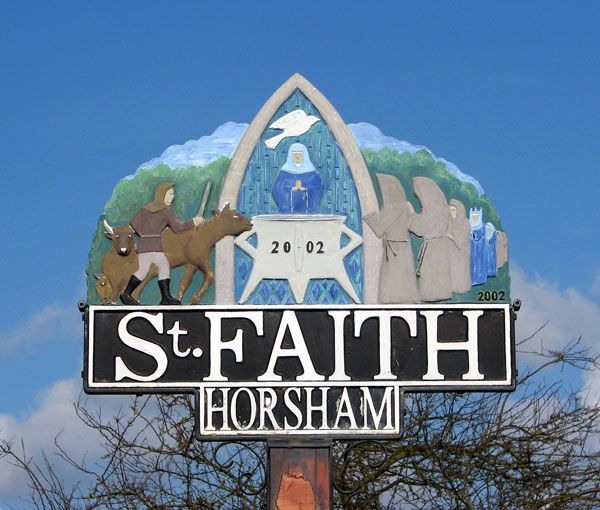 Collectively they are known as St Faiths. It covers an area of 7.33 km2 (2.83 sq mi) and had a population of 1,624 in 770 households at the 2001 census, increasing to a population of 1,724 in 797 households at the 2011 Census. For the purposes of local government, it falls within the district of Broadland. The village takes its name from the River Hor, which flows through the parish on its course from Horsford to Horstead; and a Benedictine priory, founded in honour of St. Faith that, until the dissolution of the monasteries, stood there.

Norwich International Airport, which was first developed in 1939 as RAF Horsham St. Faith is close by.

The village is home to the City of Norwich Aviation Museum.

The remains of a motte and bailey castle, on the Horsford side of the A140, can reached by following a track to the north of Church Street, which joins Horsford and Horsham St Faith.

On 17 October in the early 12th century until 1872 it played host to one of the country’s largest cattle fairs. This fair was held to the south of Spixworth Road around Bullock Hill and Calf Lane.

In 1894 John Thomas Spurrell, the younger son of Richard James Spurrell of Thurgarton House, inherited several thousand acres in the parish from Barbara, Countess von Rechberg (daughter of Thomas Jones, 6th Viscount Ranelagh, and the estranged wife of the Austrian statesman Count Johann Bernhard von Rechberg und Rothenlöwen). He built the manor house in the 1920s. In the 1930s part of the estate was requisitioned for the construction of the RAF airbase.