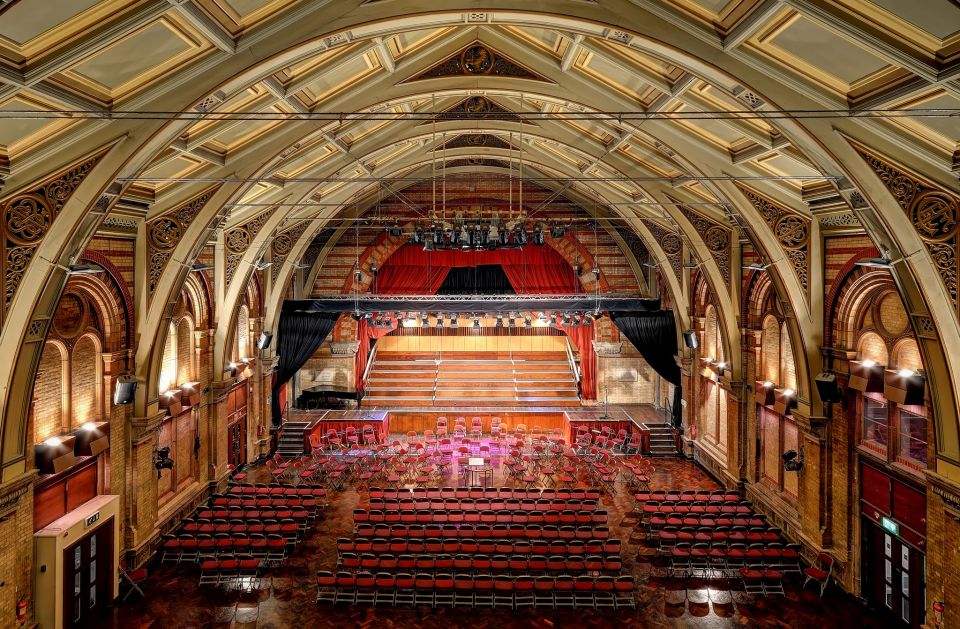 The Ipswich Corn Exchange welcomes an eclectic programme of mid-scale comedy, music, sporting events, festivals and conferences. Whether you’re on your feet, or sitting comfortably, this flexible space has something for every taste. Part of Ipswich life since the 19th Century and now the home to unmissable live performance.

In medieval times the Cornhill, or Market Hill, became the centre of trade and local government in Ipswich. This market place was the site of the medieval pillar-cross of stone, erected about 1510.

The first recorded building in the area was the Flesh Market, or Shambles, mentioned in 1346 and reconstructed in 1378 and 1583. The upper part on the last Shambles building was in the form of an open gallery, which provided a vantage point for viewing public occasions on the square below. The Rotunda, which replaced the Shambles in 1793, lasted only until 1810, when the first Corn Exchange was erected by the Corporation. The Corn Exchange opened in March 1812.

In July 1849 a number of merchants asked the Council to heighten its walls, roof it with glass, convert the iron gratins to windows and clear away the corner shops. During the 1860’s the Corn Exchange was becoming crowded on market days and the Council began to consider various alternatives, including the possibility of converting the Public Hall. In 1879 the Council decided to acquire the King Street site at the rear of the Town Hall.

During 1971 it was decided to remodel the Corn Exchange. The main requirements were for meeting, exhibitions, shows and other spectator events. The ‘new’ Corn Exchange was opened by the Duke of Gloucester on 22nd September 1975.

Ipswich Corn Exchange offers a wide range of early bird and multibuy discounts across most of their shows. Often the earlier you book, the lower the prices. Full pricing details are listed individually on each show page and concessionary discounts are highlighted where available.

Ipswich Regent Theatre’s box office, which sells tickets for the Ipswich Corn Exchange events, is open 9:30am – 5:30pm Monday to Saturday. Pop into the theatre to book your tickets in person, or give them a call on 01473 433100 and their friendly ticketing team will be on hand to help. The box office is closed on Sundays and public holidays unless there is a performance.

Alternatively, you can book your tickets online 24/7!

The Corn Exchange box office is open 2 hours before any show at this venue for ticket collections, walk-up sales, or if you fancy booking for another of their upcoming shows.