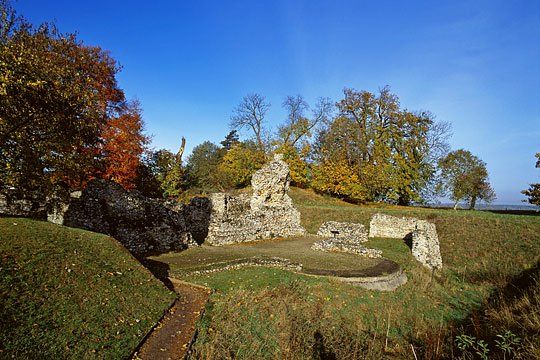 The remains of a Norman chapel, later converted into a house and enclosed by earthworks in the late 14thC by the notorious Bishop of Norwich, Hugh de Despencer.

A place with an unusual story, told by graphic panels. The small Norman chapel here stood on the site of an earlier timber church, probably the Saxon cathedral of East Anglia. In the 14th century it was converted into a fortified manor house by Henry Despenser, the unpopular Bishop of Norwich who brutally suppressed the Peasants’ Revolt of 1381.

In the late Saxon period North Elmham was the principal seat of the Bishops of East Anglia and the centre of a great episcopal estate.

Excavations have revealed evidence for an earlier timber structure, probably the Anglo-Saxon cathedral, which went out of use when the seat of the Bishop was transferred to Thetford in 1071.

Some time between 1091 and 1119 Bishop Herbert de Losinga founded a new parish church for the village and built a small private chapel for his own use on the site of the old timber church.

In the 14th century, Bishop Henry le Despencer held the manor of North Elmham. He turned the chapel into a house and in 1388 obtained a royal licence to fortify. He was not a popular man, especially in Norfolk where he was despised for his merciless quashing of the Peasants’ Revolt, and this fortification suggests he felt ill at ease among his tenants.

There is no record of any bishop occupying the site after Henry’s death in 1406 though manorial courts continued to be held there. When Elmham passed into the hands of the notorious Thomas Cromwell the ‘castle’ site was assigned to the vicarage and gradually fell into ruin.

By Public Transport:
From Norwich station it is 12 miles to North Elmham Chapel.