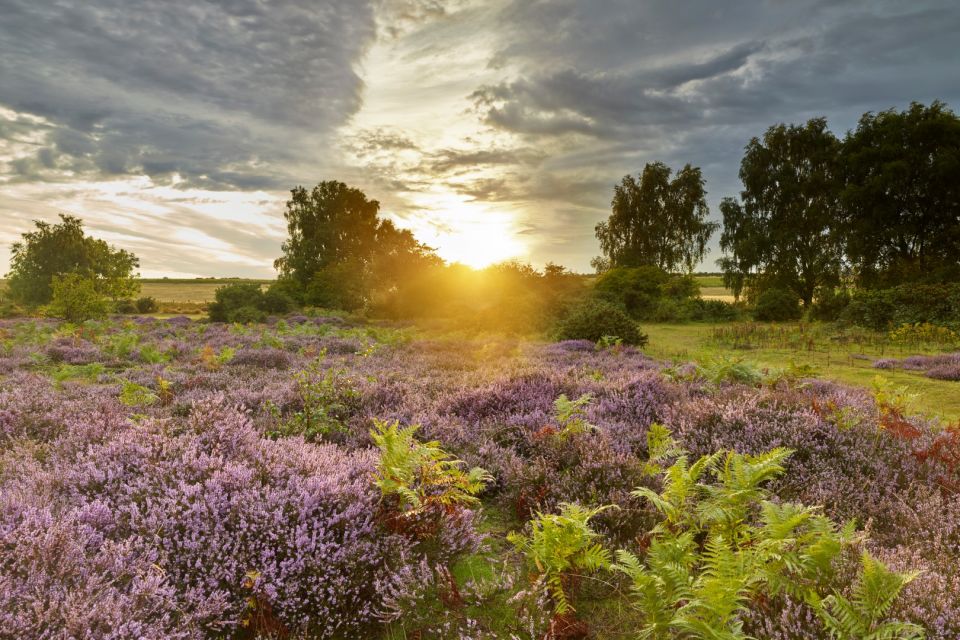 At least 15 species of dragonfly frequently occur at Roydon including the rare black darter, for which this is one of only three breeding sites in Norfolk. More than 30 species of butterfly have been seen including white admiral, brown argus, and both green and purple hairstreak. 450 species of moth have been recorded and the impressive minotaur beetle is found.

Reptiles, including adder, are present. Numerous rare and interesting plants occur, but perhaps the greatest spectacle occurs in August and early September when the site’s prodigious stands of heather are in flower. NWT has added to the national nature reserve in recent years with Grimston Warren, The Delft and Rising Breck.

Many birds frequent the heathland, with nightjars and woodlarks nesting in good numbers. In winter there is usually a small roost of hen harriers, and merlins are seen.

Barn owls and, occasionally, short-eared owls occur. A single great grey shrike occurs during some winters. Flocks of linnets breed on Roydon Common, and are often noticed as feeding flocks on Rising Breck.

Sundew
Wet, boggy areas of the Common are home to all three British species of sundew: round-leaved, oblong-leaved and great. These carnivorous plants can only extract a limited amount of nutrients from the acidic conditions they live in, so supplement their needs by catching and digesting small insects, which they lure with the sticky, sweet- smelling droplets on the end of their hair-covered leaves.

Black darter
In Norfolk, black darters breed around the Gaywood Valley Living Landscape at Roydon, Grimston and Dersingham
Bog. Males are easy to identify, being the only black-coloured darter in the country. Females, however, are largely yellow and similar to several other darter species.

Raft spider
Roydon Common is the only site in East Anglia to host this species. This is one of the two largest British spiders, along with the fen raft spider, which occurs at Lopham Fen in Suffolk. They are found in dykes, and specially managed ponds which need to be kept relatively free of plants; the spiders need open water to hunt, as they rely on detecting the ripples caused by their prey.

Nightjar
As darkness approaches a strange sound fills the heath – an almost- mechanical mix of reeling, rattling and croaking. These guttural, churring calls belong to one of the UK’s most enigmatic summer visitors: the nocturnal nightjar. Nightjars are odd- looking birds; their plumage is an intricate mix of camouflaged browns, making them virtually impossible to spot while at rest. In flight, they’re an entirely different prospect: long-winged and hawk-like, though with a jerky, flapping action, which brings to mind a giant moth. Several ‘churrers’ can be heard – and sometimes seen – on calm summer evenings. The males can be distinguished by white patches on their wings and tail.

The Roydon Access Project will help to protect this fragile and fascinating habit, while making improvements for wildlife and visitors. Most of the improvements are taking place on Rising Breck, land to the west of the national nature reserve. They include –
A purpose built car park to replace the informal parking area which will be returned to grazing land.
A new path from the car park to join the network of paths with attractive routes for walking/dog walking.
New gates to make it easier to get around.
Three bench seats to take a break and enjoy views across the nature reserve.
A dry stone seat made from local carstone, which will be a focal point for group visits and a place to listen to nightjar on summer evenings.
New interpretation and signs to help visitors to understand the importance of the area for plants and wildlife.
New tree planting – oak, rowan and hawthorn – which will provide new habitats for foraging nightjar and other wildlife.

The work has been planned to be as sustainable as possible. Waste from the old parking area – mainly left over from the redundant quarry on and imported aggregate will be used as the sub-base for the new car park. Soil excavated in preparing the car park will be used to recreate grazing land. As far as possible local materials will be used.

The car park is now fully open following essential maintenance works. Thank you for your patience during its closure

NWT Roydon Common is east of King’s Lynn. Leave King’s Lynn on the A149 to Fakenham and turn off at the Rising Lodge roundabout. Take the A148 to Fakenham for 300m and turn right towards Roydon. Two car parks are available on the right – 1km along, and 2.7km along.

Entrance via the two car parks on the Rising Lodge to Grimston road at map references: TF 681230 and TF 698229