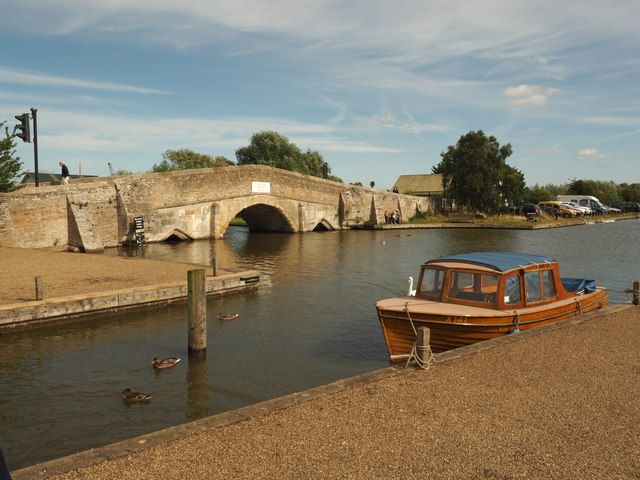 Potter Heigham is a village and civil parish on the River Thurne in the English county of Norfolk.

The village is known for its mediaeval bridge and the Church of St Nicholas. There are two national nature reserves within the parish; the Ludham – Potter Heigham NNR is to the west of the village whilst the Heigham Holmes NNR is to the east. The Weavers Way, a long distance footpath, also passes through the village on its way from Cromer to Great Yarmouth.
The village’s name means ‘Hatch homestead/village’ or perhaps, ‘hedge homestead/village’. There is evidence for Romano-British pottery industry here hence the ‘Potter’ addition.

The parish of Potter Heigham (pronounced locally as Ham) has a number of features related to the World Wars. Hickling Broad, to the north of the parish, was used as a seaplane base during World War I. Part of Ludham Airstrip, a now shrunken remnant of a larger World War II airbase, is also built on parish lands, and there were a number of defensive structures around the medieval bridge.

The Museum of The Broads was opened in Potter Heigham in 1996, and moved to its current location at the Poor’s Staithe in Stalham in 1999.

A busy centre for boat hire and shopping, with a fantastic medieval stone bridge, which features in Arthur Ransome’s Coot Club. Potter Heigham is the gateway to the wildest, quietest part of the Broads, but you might find it hard to imagine from the busy, traditional holiday atmosphere at the bridge and the staithe where boats moor.