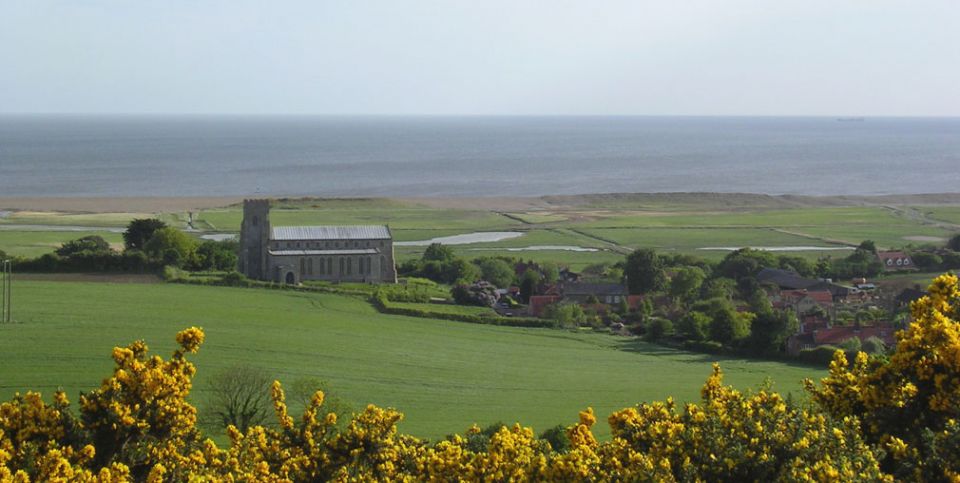 Salthouse is a village and a civil parish in the English county of Norfolk. It is situated on the salt marshes of North Norfolk. It is 3.8 miles (6.1 km) north of Holt, 5.4 miles (8.7 km) west of Sheringham and 26.3 miles (42.3 km) north of Norwich. The village is on the A149 coast road between King’s Lynn and Great Yarmouth.

The name of the village comes from the once valuable commodity of salt. It was once what it says it was: a “House for the storing of salt” and the Domesday Book of 1086 describes it so. Norfolk and Lincolnshire had more salt pans than any other counties of Medieval Britain. To produce salt seawater was boiled in clay vessels with the salt formed after the process fashioned into blocks of a standard weight and measure. Much evidence of this activity can be found along this stretch of the coast. There is evidence of even earlier settlements around Salthouse. During the construction of the village hall in 1954 a drinking vessel or beaker was dug up which dated from the Neolithic period around 2000 BC along with the fossilised vertebrae of a whale. Evidence has also been found of a Neolithic Causewayed enclosure. The earthwork is approximately circular, with a diameter of 60 metres. The circuit appears to be divided into at least seven separate lengths of ditch, although there is a larger gap to the north where a further two stretches of ditch may be obscured. The enclosure lies on a south-facing slope 50 metres above sea level on Salthouse Heath. The way in which this enclosure was used is not fully understood, but it may have been a meeting point for small, dispersed groups of people living in the surrounding area, a place where the exchange of goods, ritual feasting and other ceremonial activities might have taken place. There was also evidence uncovered of Bronze Age activity also. The tumuli at near-by Three Halfpenny and Three Farthing hills yielded brown clay urns, burnt bones and other relics in 1850 excavations. On Gramborough Hill evidence has been uncovered of a substantial Roman building believed to have been a fort with a settlement which was occupied between the early 3rd century until the middle of the 4th century.