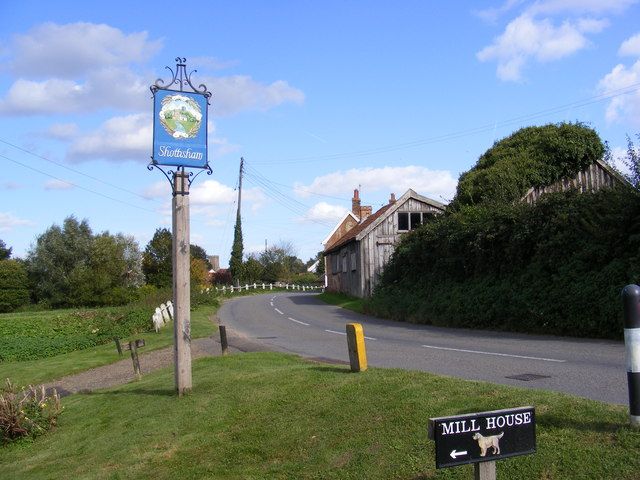 Shottisham is a village and civil parish in the East Suffolk district, in the county of Suffolk. It lies in the Wilford Hundred, about four and a half miles south-east of Woodbridge, between the parishes of Sutton, Alderton, Ramsholt and Hollesley, in the Bawdsey peninsula.

The origins of Shottisham and its name can be traced back to Old English, being translated to ‘Scot or *Sceot’s homestead/village’.[3] The earliest history of Shottisham is recorded in the 1086 Domesday Book and is described as being located in the Wilford Hundred. Shottisham had 24 households which was quite large compared to other nearby village parishes, containing 1 smallholder and 15 free men. The land was valued at £1.8, of which the overlords at this time were Edric of Laxfield and Godric of Peyton.[4] St Margaret’s, the medieval parish church, which has a square tower holding a single bell, was restored in 1845.
There are a number of listed buildings in Shottisham, not just St Margaret’s parish church. The public house The Sorrel Horse is a grade two listed building as well as Shottisham Hall which also became a grade two listed building in August 1988.