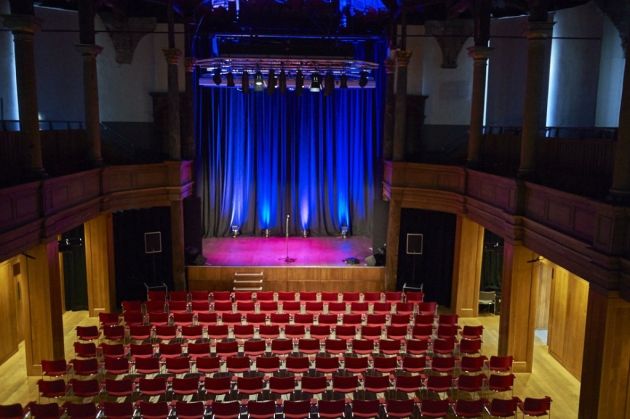 Great Yarmouth’s only all-year-round theatre will soon be back.St. George’s Theatre is preparing to open the doors, raise the curtain and turn on the spotlights as live entertainment returns to Great Yarmouth. From top class comedy and amazing musicals to professional plays and community drama – we have everything

In the early 1970s a group of dedicated local people and The Masquers amateur dramatic society successfully sought to establish the redundant building as a centre for the arts and a theatre. Many performances, by local groups and professional companies, took place here in the 1970s and right up to 2006 when the building was forced to close due to severe structural defects, including an unstable tower.

For the next three years it was fenced off and shrouded in scaffolding. Its deteriorating state resulted in the church being declared ‘at risk’ by English Heritage and the local authorities. Funds for its restoration and conversion were secured from the Heritage Lottery Fund in 2009 and this historic building was saved.

Make the most of your time with us with a pre-show drink in our Stage Door Café, right next door to the theatre. It opens an hour before the curtain goes up for a glass of wine, beer or bubbly. The café is also open Monday to Saturday from 10.30am to 3pm for cakes, snacks and hot and cold drinks. And when the weather is fine we fling open the doors so that you can soak up the sunshine on the plaza.

You can contact the St. George’s Theatre Box Office to book tickets and make enquiries Monday to Saturday from 10.30am to 3pm.
Visit the Box Office in person at the Stage Door Café next to the theatre.Book tickets online by clicking here.Email us at tickets@stgeorgestheatre.com.Call us on 01493 331484.You can even send a letter to us a Tickets, St. George’s Theatre, King Street, Great Yarmouth NR30 2PG.