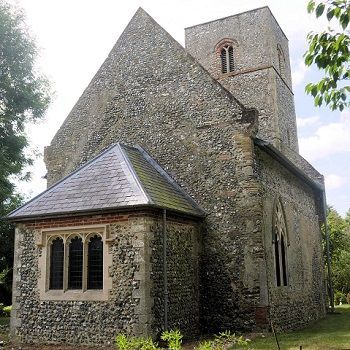 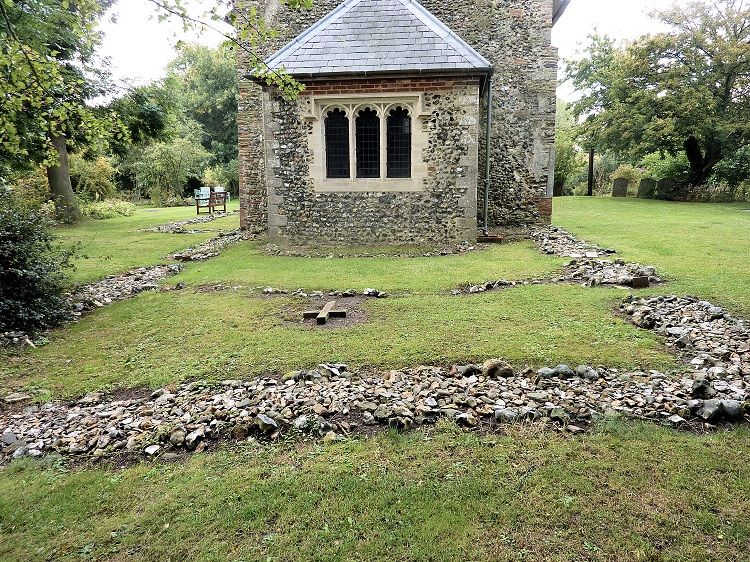 Once derelict and ruined the church was brought back to life thanks to the dedicated work of Bob Davey. The church has extensive wall paintings dating from the C12, C13 and C14 which overlay possibly the best sequence of late Saxon wall paintings in Western Europe.

This is an ancient church unused for services except very occasionally. People come to see the paintings and hear its story. Others, perhaps randomly whilst on holiday, or locals bringing friends, cycling or walking (Peddars Way).

When the Romans came they built a villa in the valley. Perhaps there was also a Roman building on the church site. Many Roman stones and bricks were used in the construction of the church. Did the villagers drag them from the villa or were they abandoned on the hill when the Romans left?

It was the Saxons who replaced the Romans at Houghton. We know little about them and so far finds are scarce. A length of wood found but not exposed underneath the floor might have been the foundation of an earlier wooden church. Excavation work to uncover more of the site is vital if we are to begin to understand its prehistory.

Whether the stone church is earlier than its given date of 1090 is debateable. Certainly there is Saxon influence, but Saxon builders would also have worked in Norman times. Domesday tells us that King Edward, King Harold and the Godwin family owned land in the Pickenhams and other local villages. Might they have commissioned a church here?