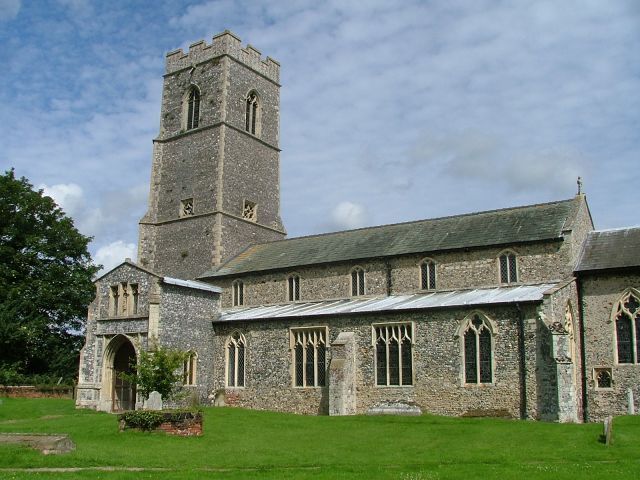 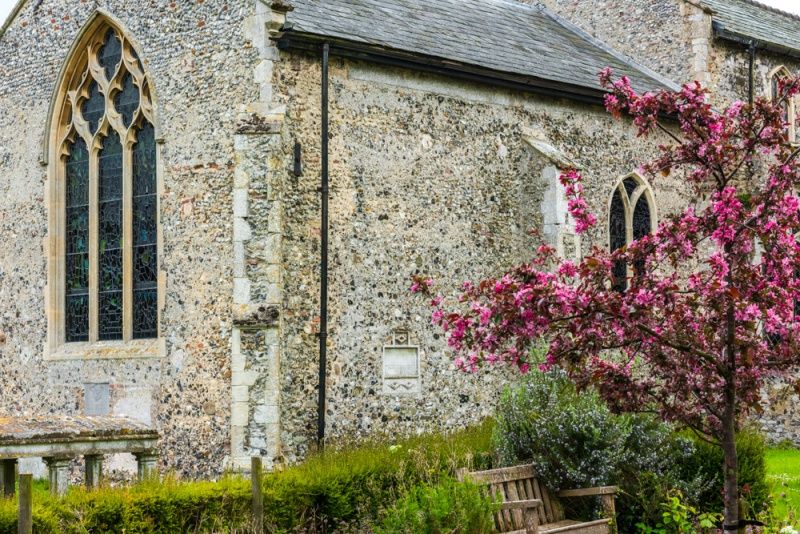 Two historic churches stand side by side in the Norfolk village of South Walsham. St Mary’s is by far the larger; it dates to the 13th century and acts as the parish church. The smaller, and by a century the younger, is St Lawrence church, now redundant as a place of worship and more properly known as St Lawrence’s Centre for Training and the Arts.

St Mary’s is the older of the two churches and dates to the 13th century. It is a very large church given the size of the village it serves, and has some very good medieval features.

The best surviving medieval feature is the collection of 15th century carved bench ends in the nave. Each bench has carved poppyhead bench ends, which, despite the name, do not necessarily depict poppies. The name derives from the French word poupee, for puppet, and is used generically to describe carved arms rests that decorate the ends of benches.

Each bench has a poppyhead, some of which also have shields. Some of the shields are inscribed with a single letter, which is thought to show which family paid for, or rented, that bench. Other shields have Biblical phrases from the Ave Maria, though three of these phrases have been defaced. The shields are thought to have been carved to spell out the Latin for ‘Ave Maria, Gratia Plena, Dominus Tecum, Benedicta Tua, In Mulieribus, Et Benedictus, Fructus Ventris, Tui Jesus, Amen Maria Regina, Beata Virgo Maria’

‘Hail Mary, full of grace, the Lord is with you, Blessed are you among women and blessed the fruit of your womb Jesus, Amen. Mary Queen of Heaven, Blessed Virgin Mary’.

What is interesting is that several of the phrases are out of order, as if someone did not know the correct phrase, which would make sense in an age where literacy was not universal.

While the benches are a wonderful medieval survival, the windows are full of richly coloured glass by the Victorian master, William Morris. In the south wall are windows depicting St Cecilia, St Mary, St Urith, and St Etheldreda. St Urith is an unusual choice, for this little-known West Country saint, martyred in the 7th century, lived her whole life in the south-west of England and is scarcely known outside Devon.

Separating the nave and chancel is a 15th century painted screen. The base of the screen is painted with dark green and red panels under trefoil arches, while the delicate upper section of the screen is mostly unpainted. The screen has clearly been restored, but the quality of the original medieval craftsmanship is stunning.

There are a pair of ancient grave slabs. One commemorates Richard de Suthwalsham, Abbot of St Benet’s Abbey of Hulme, who died in 1439. When the abbey church was pulled down the grave slab was transported to the Duke’s Palace in Norwich, where it was rather unceremoniously used as a doorstep. Half of the slab was brought to South Walsham in 1939, and the other half installed in Norwich Cathedral.

In a frame hanging on the chancel wall is a 17th-century Italian altar frontal presented by Lord Fairhaven. Another 17th-century relic is the old parish chest.

At the west end of the nave, just in front of the organ, is a 15th-century octagonal font. The bowl is carved with ornate traceried panels, while the stem is divided into plain sections by moulded pillars.

St Mary’s is a delightful church, full of historic interest.