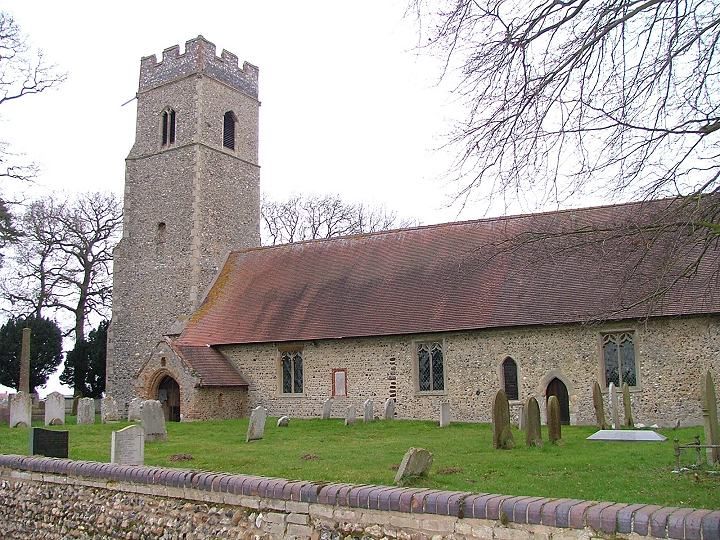 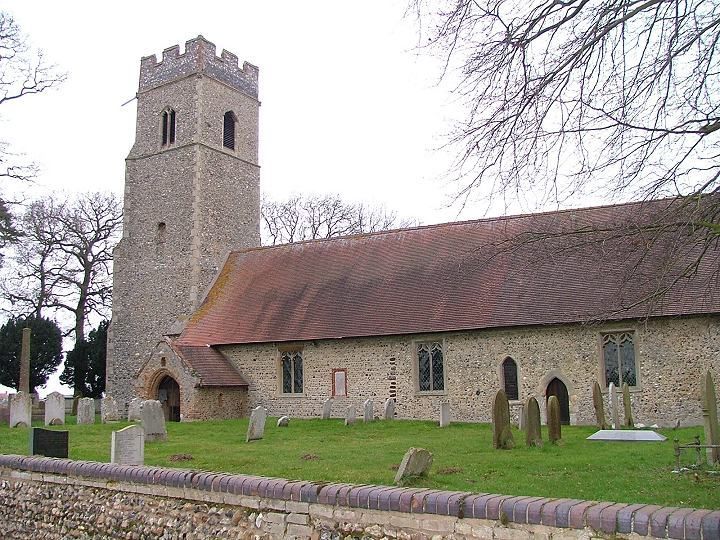 The church is impressive for its simple antiquity and draws an increasing number of visitors every year in spite of its isolated position in the middle of the fields. This ‘barn church’, with its nave having a very old single-framed roof and collar, goes back some three centuries.

The roof has timbers which follow the shape of the branches from which they were cut, and is thatched. The nave beams are exposed beams underside and carrying the thatch, while the underside of the Chancel is boarded. The main right of way is through Manor Hall Farm, but there are three other routes, one from Beech Farm, originally a track for vehicles but now designated a footpath, another from Lound called Snake Lane, rough but useable by vehicles, and the fourth from Kitty’s Farm and Somerleyton Hall. All four intersect just below the church, a medieval junction.

The first thing that will probably impress the visitor is the shape of the Tower – on a round base but for three-quarters of its height, octagonal in its exterior. The Tower is circular inside up to the Belfry sills. It is uncertain whether an original tower fell, or whether the 13th century just saw a change in the exterior construction, which is the more likely, since the inside of the Tower is circular up to the top. In the change of the exterior from round to octagonal, on the existing round base, quoins of early bricks were used. In the round base the early English vestry window was retained. The edges of the octagonal construction are set with continuous layers of interesting tiles, of early date. Belfry lancet windows 7 ft high and 3 ft wide were added, one for each face of the tower, and with a fan vaulted roof made in early 13th century bricks, with eight ribs. It is the only known vaulted roof on an East Anglian tower. This section may be three centuries later than the original octagonal

There are no fillets between the tower and the church and inside the east tower wall is circular over the tower arch, suggesting that both tower and nave were built at the same time, pre-Conquest, though expert opinion seems more or less unanimous that the nave is 13th century. In the south west corner of the nave is a large flint and a piece of sandstone – possibly indicating a Saxon quoin of flint and oddments. The upper doorway built or reframed in the 13th century – the great period of the Inglose family – contains 13th century bricks and is pointed. On the nave side, the doorway is pointed, with hood mould. There is no coursing in the flintwork outside, but there are again early bricks as there are at the base of the tower in the plinth, but these are later in date. The tower is about 50 ft high, with 2 ft thick and 2 ft high battlements at the corners only.

The thickness of the walls of the tower tapers from 23/4 ft at belfry height to just over 3 ft at the base. The external circle of the tower has a perfect tangent in the nave west wall. The upper doorway framed in the early 13th century with early bricks of that period is 6 ft by 21/2 ft wide and 15 ft above the ground. The nave is 54 ft long and 14 ft wide, the Chancel 29 ft long and 16 ft wide, with a sanctuary area 12 ft from the east wall. The rood steps are to the south with the exterior wall filled in with flint and brick, to bring it into a straight line with the south wall, continuous for nave and chancel. This straightening of the wall at that point probably meant the removal of a ‘bulge’ at the point where the steps go up – or they had very small thin clergy in those days!

The inside walls of the Nave and chancel are all of plaster, dressed originally with limewash. The roof-line being all in one, the width of the Chancel is 2 ft greater than the Nave. The Chancel may be of 13th century date, with the Nave and round base of the tower pre-Conquest. There are no buttresses, nor porches north and south. There is part of a scratch dial on the left hand jamb of the south door, and two votive crosses, one on each jamb. There are three consecration crosses, two in the nave on opposite walls, and one in the north wall of the Chancel, all in central positions lengthwise. In the centre of the consecraction crosses are incisions into the wall – points at which the rush lights were pushed in, to give light in the darker days.

A medieval will states !1472 Thomas Kees bequeathed to the new bell if they can get it within 4 years” – this was recast in 1859 and inscribed “J. Warner and Sons, London”. J.J. Raven in his “Church Bells of Suffolk” (1890) lists the Ashby Bell as having no inscription; the Returns of 1553 record “Great Bells ii” while Davis writing in 1829 said there was no bell!

Following extensive repairs to the Tower in 1924, widely supported by generous donations and numerous events and by a handsome donation from Lord Somerleyton, there followed in 1957 restoration work on the tower roof and bell chamber. By this time it was reported that the tower and belfry were leaking badly and were full of rotten and ancient timbers, so that it had become dangerous even to toll the bell. Under expert direction, but mainly through direct labour by Mr. W. Hudson and his assistants, Mr. Ivan Emmerson and Mr. Fred Butcher, mostly in their spare time, the rotten timbers were removed, but even in their decayed state still showed the marks of the handsaw in the oak felled probably in Ashby Wood some 700 years before. Messrs. Dawber and Townsley, the roofing experts, were called in to advise. The above workers laid a thin layer of concrete mixed with waterproof cement. This was covered with wire mesh reinforcement and a further 2 inches of waterproofed concrete applied. This was treated with compound, and a heavy gauge felt covering was cemented all over with a cold mastic.

The bell was dismantled and lowered to the first floor with pulleys fixed precariously to the only ‘sound beam’. The old floor joists and the bell cradle were so riddled with rot and woodworm as to be unsafe, so all was removed. A new floor was built.

A steel cradle, welded in sections, and made to bolt to two 12 ft steel girders each weighing about 11/2 cwt. Was made in the Manor Farm workshops, again mostly in spare time. The steel girders were hoisted into the belfry and cemented in place diagonally across the tower, and the cradle bolted in position. Mr. Harry Wilson, estate foreman for three generations of the Crossley family, made a new woodstock for the bell, and after this had been fitted the bell was hoisted and re-hung.