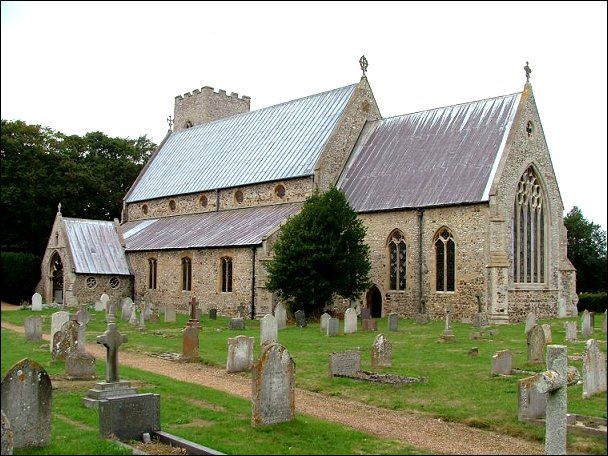 The Parish Church of St. Mary the Virgin is situated a little to the south of Old Hunstanton village, just outside the main entrance to the park of Hunstanton Hall. This was the seat of the le Strange family, which for many generations, exerted a great influence over the church and indeed the whole district.

Hunstanton has been inhabited since the Stone Age. The pre-Roman Ichnield Way, which crossed England from the west ended here. Peddars Way from Thetford terminated in nearby Holme-next-the-Sea from where a ferry crossed The Wash once linking this to Lincoln. Artefacts unearthed locally indicate that a small Romano-British settlement existed sometime later.

By 500 AD an Anglo Saxon settlement existed here. A cemetery and the type of ornament found, indicate the inhabitants were probably from North Jutland. Hunstanton is an early English name and no doubt the people were pagan. However, about 631 AD, it is claimed that Bishop Felix from Burgundy landed near Babingley and built there the first church in East Anglia. He established a missionary base at Dunwich and soon converted the whole kingdom of East Anglia to Christianity.

In 854 AD the boy Edmund with Anglo Saxon connections, was reputed to have landed at Hunstanton from Germany. He inherited the throne of East Anglia which comprised Norfolk and Suffolk. Edmund was crowned at Bures in Suffolk by Bishop Humbert of Elmham. Later, when defending his kingdom from the Danish invaders, his army was overwhelmed in battle near Thetford. He was captured at Hoxne, bound to a tree and died in a fusillade of arrows.

Edmund became the first patron saint of England, before St. George. His shrine was raised in what is now known as Bury St. Edmunds – hence the name. The monks of Bury in the later Norman period, erected a chapel to his memory on the cliffs at Hunstanton near the place where he was reputed to have landed. This fell into disuse in the 16th century but the ruins are still extant, recently converted to a garden in remembrance of certain famous Norfolk personalities. It is marked on maps as St. Edmunds Head or Point.

The first church on the present site was built on land left by Aelfric III, Bishop of Elmham in 1038. This land he acquired under King Canute, and held lawfully under King Harold at Hunstanes tune by Esten broke (i.e. the River Hun), willing the land to St. Edmunds Abbey at Bury. It is believed that monks from Bury erected a church here as one existed in the reign on Edward the Confessor. The Domesday Book entry describes it as “a church on the land of St. John, nephew of Waleran”.

This original church must have lasted for several centuries, probably with alterations and additions. It would have been a roughly built structure of early Norman style. All that remains of it are the font, still in use, a stone piscina now in the vestry. A carved stone coffin at the east end of the north aisle dates back to the 11/12th century. This must have contained the body of someone of importance.

The le Strange family has been associated with St. Mary’s for nearly a thousand years. Although the direct line has been broken on several occasions, interest in the church by the family has been maintained.

There is a Domesday Book entry stating that Ralph, son of Herluin held a square league of land of Roger Bigood, Earl of Norfolk. His daughter and heiress married Rhiwallon (or Roland) le Strange. Both came from the town of Dol in Brittany. Through this marriage Roland le Strange acquired land at Hunstanton and the family have continued in the same manner to the present day. The history of the le Strange family over the centuries has been well researched in a number of books on the history of Norfolk and its titled families. These can be inspected at most local public library reference sections.