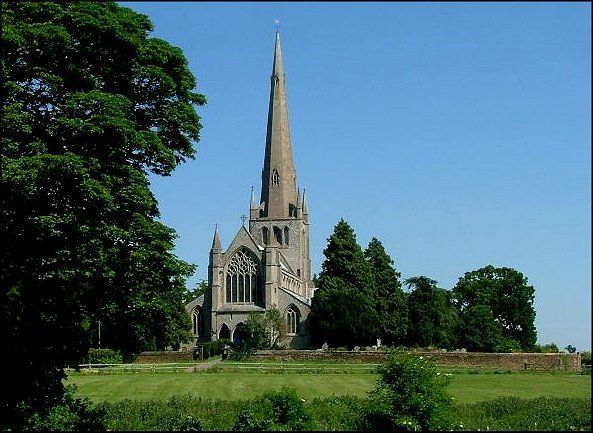 Pevsner called St Mary’s church “the most exciting C14th Decorated church in Norfolk.” St Mary’s church with its 175 foot tall tower and spire, sits on high ground above the village, and was often a landmark for mariners navigating The Wash. Someone called it ” God’s rocket to heaven”. The original steeple was erected by John of Gaunt, Duke of Lancaster, the son of Edward III.

Its stone spire, soaring 175 feet, is a rarity in Norfolk, with only the Cathedral and three other churches having one. The spire was built in the late 14C, and has low flying buttresses, and two sets of lucarnes (dormer windows). There are short spirelets on each top corner of the tower, and at the west end of the central nave. The tower was built in the centre of the cruciform church and still has the nave and two transepts supporting it on three sides, but the north one has been shortened, and the chancel had disappeared by the end of the 16C. There are six bells originally cast by Thomas Newman in 1710, though three were re-cast in 1959.