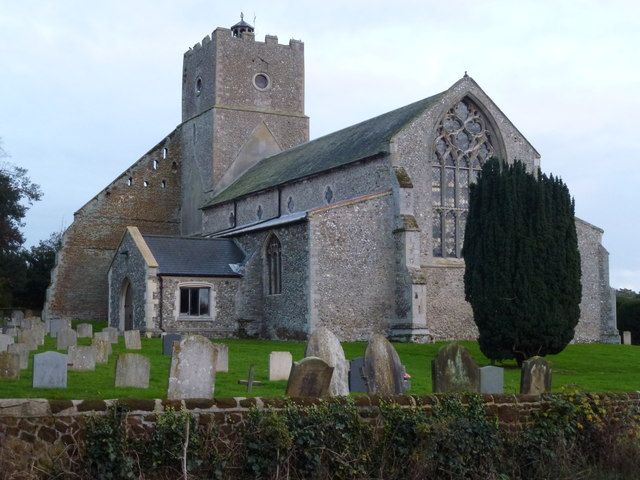 Although a Saxon or Norman church probably pre-dated the current building, the first documented record derives from a covenant dated 1248 for the building of a chapel dedicated to the blessed Virgin Mary.

The main structure of the church, originally cruciform in plan with a tall, narrow nave (without aisles,) chancel, low transepts and a substantial central ‘crossing’ tower consequently dates from the late 13th century; aisles, clerestory, the south porch and an enlarged west window were added in the 14th and 15th centuries.
The materials used reflect the variety of local rocks and stones available – flint, carstone (local sandstone containing iron), limestone, chalk and brick, as well as a small amount of glacial crystalline rock.
Over time the tower became unsafe, resulting in the ‘filling-in’ of the chancel arch in 1712; in 1802 the large buttress was added, with lesser structures on the south side. In the photograph (right) you can see how transepts rising to a great height were designed to support the tower, but these transepts were not well maintained over the years resulting in the extraordinary buttress on the north side being built to support the tower circa 1800.
Following decay, the chancel is now just two-thirds of its original length. In 1894 the west gallery and organ were dismantled and in 1928, the ceiling above the nave and chancel were opened up by the removal of the false ceiling and in fill.