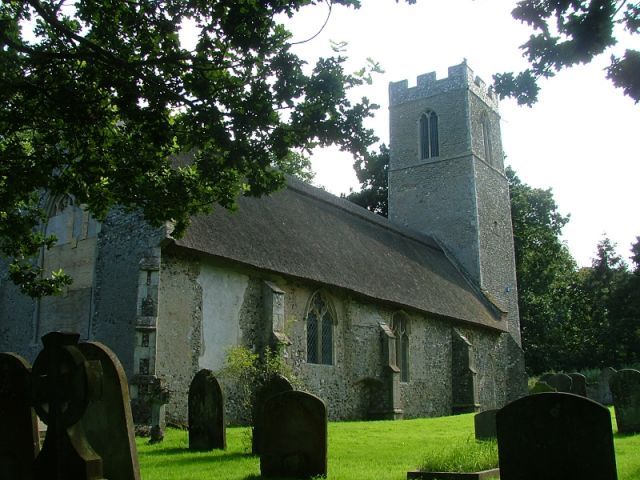 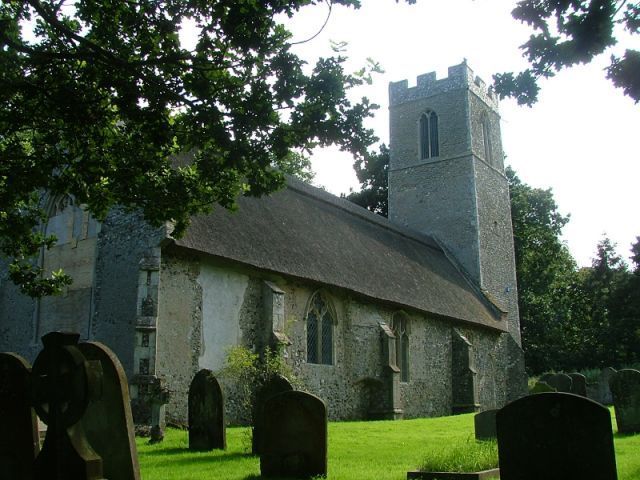 St Michael’s church, Irstead, is a small thatched building in a quiet rural backwater on the edge of the Norfolk Broads National Park near Barton Broad. The remote church is composed of a narrow nave and south aisle, south porch, and rectangular west tower. Above the south porch is a stone carving of St Michael wrestling with his dragon.

The present church dates to at least the 14th century, but fragments of Norman carving suggest that it stands on the site of a much earlier building. The west tower was built on the proceeds of a bequest by William of Wykeham, who died in 1376. Though the name is the same, this is not the same William of Wykeham who founded Winchester College.

The late 14th-century font is outstanding, even in a county blessed with such a large number of outstanding medieval fonts as Norfolk. It is built with a central pedestal supporting an octagonal bowl. On the bowl are panels depicting religious
themes. Unusually, some of the panels retain races of original paint colouring. One panel depicts the head of Christ, another a pagan Green Man.

The painted rood screen is of outstanding interest. It is made of four carved wooden panels, each panel depicting three saints. In each case, the head of the saint has been disfigured by scraping, a reminder of the religious turmoil of the English Reformation, when many marvels of medieval art were destroyed or damaged. The figures have been retouched in the Victorian period, which explains why the colours of the painting look so vivid!

On the walls of the nave are large traces of medieval paintings, including a figure of St Christopher. The paintings were limewashed at the Reformation, and hidden from view for over 500 years. There are some very nice carved bench ends, including a rather sad looking figure of a rabbit and dogs playing with balls.

The pews are original, with some fascinating bench end carvings. The pulpit is even more interesting; it is probably Elizabethan, with linenfold panelling. On the pulpit stair is a carving in the form of a monk’s head, thought to have come from a wooden staff used by the monks of St Benet’s Abbey around AD 1250.

There are fragments of medieval stained glass in the windows, including a castle and coat of arms in the north window and four roundels depicting angels in the east window.

The ironwork on the worn south door dates from 1290 and is the work of Thomas de Leighton. If you examine the door you can see numbers carved into two of the boards by the medieval carpenter. A fragment of stone carved with a Norman chevron has been inserted above the door, and there are more Norman carvings on either side of the blocked north doorway.

In the churchyard is the grave of Sir Francis Palgrave (1788-1861), founder of the Public Records Office. His son, also named Francis, was the editor of the classic book ‘Golden Treasury of Songs and Lyrical Poems’.