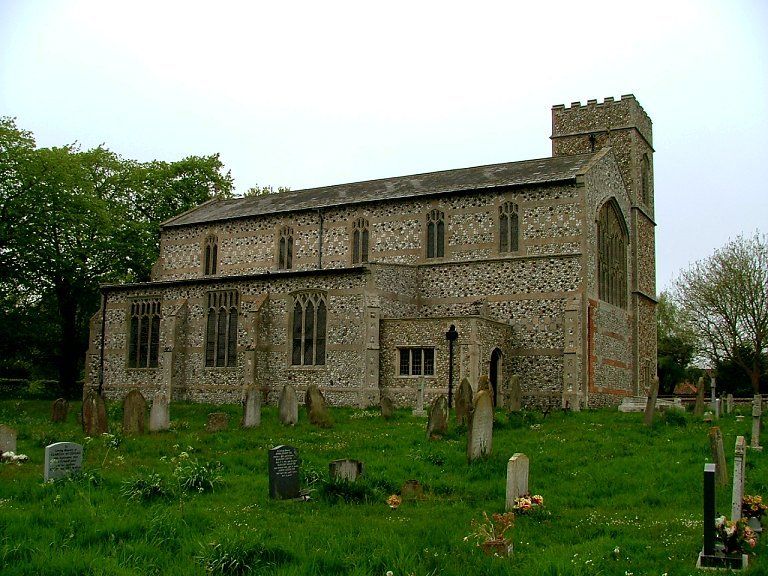 Until the 14th century, the village stood round the old 12th century church, between the present site and Hunworth. After the Black Death the village was re-established in two locations: Edgefield Green and Edgefield (Ramsgate) Street. For hundreds of years, the old church stood isolated from the village and suffered from neglect. However, in 1876, Walter Marcon, son of the previous rector, and born in the Rectory (in which he later died – in the same room) was appointed Rector, and became a much-loved and respected figure.

Canon Marcon found the church inconveniently sited and in a poor state of repair. He wrote, “Its broken and moss-covered walls, its miserable seating, its chancel arch with a threatening bend in it, its wretched altar old and stained, its font with only its early English bowl remaining, without pedestal or foot piece, were enough to try the stoutest heart”. A devastating restoration about 1820 had reroofed the church at the cost of the lead from the roof, four bells and a monument, all of which paid for a cheap, deal roof which “in one pitch covered nave, aisles and clerestory”. Marcon decided to rebuild the church halfway between Edgefield Green and Edgefield Street. The Marchioness of Lothian gave the site. Bishop Pelham was initially discouraging, doubting if a faculty would be forthcoming. However, the Rector organised savings cards for the parishioners, and eventually, after a great struggle to raise the money, the work began.

He asked John Dando Sedding, a well known Victorian architect, whom he had known in his curate days, to design the building. The main part of the old church was demolished, and much of the material was carefully marked and then incorporated in the new building. The work took two years and the final cost was £2,106!

The new church, dedicated to SS Peter and Paul, was consecrated by John Thomas Pelham, Bishop of Norwich, on July 14th, 1884.