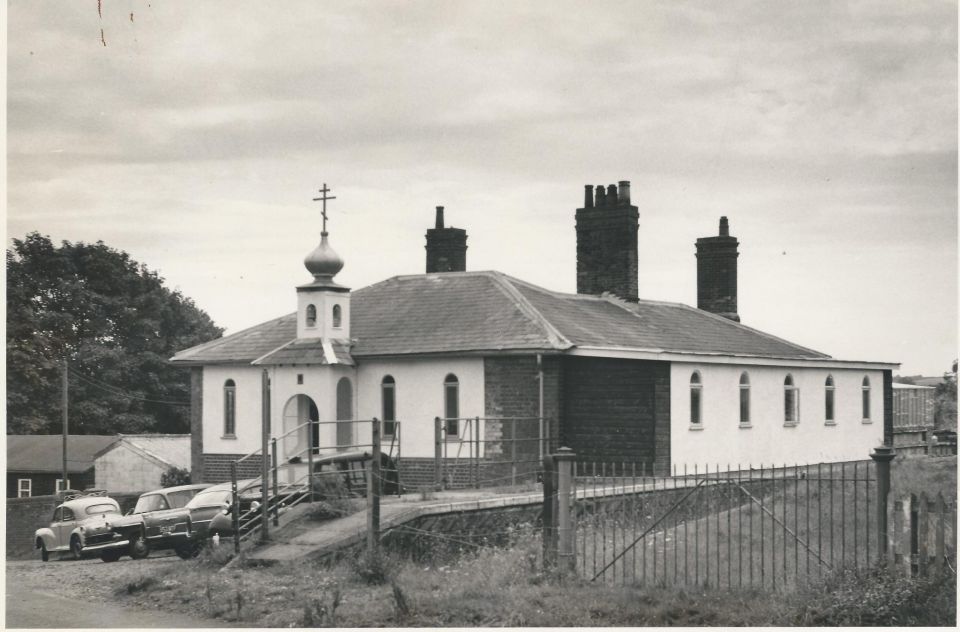 Former railway station housing Pilgrim Chapel, Railway Heritage and Icon Museum, and Quiet Garden for reflection. The chapel and museum are too small to open safely under pandemic restrictions. Visits to the garden by prior appointment. The Chapel has been open to visitors daily since 1967. Styled on the Byzantine model with icons, an icon screen, tower and onion dome, the Orthodox Christian Chapel until 2009 had an iconographer.

We are going through the development phase of a heritage lottery bid to enable us, with funding, to restore the building, a former railway station and platform. With funding in place our aim is to provide displays of icon and railway heritage with a community garden which is a work in progress.

St. Seraphim’s story really begins in 1966 when Fr. Mark (later to become Fr. David) and Leon Liddament came to Walsingham as part of the newly formed Brotherhood of St. Seraphim. Their role at the time was to look after the little Orthodox Chapel that had been built in the Anglican Shrine; however, they soon felt that the local Orthodox needed a larger church. Looking around, the only buildings that were available at the time were the old prison and the old railway station. Finding the station a better option, they set about converting the building to its current form, which, as the building was being rented from the council, left it practically the same as the railway days with the addition of an onion dome and cross. While in the beginning they had planned to live and work in the rooms adjoining the chapel, events led to the establishment of a monastery in Dunton and a parish church in Great Walsingham, the Church of the Holy Transfiguration. However, St. Seraphim’s has remained a pilgrim chapel open to all who visit Walsingham since its establishment.

St. Seraphim’s Trust was formed in 2005 and the building was finally purchased in 2008. Throughout its history, St. Seraphim’s has been a centre for the creation of Orthodox Icons with both Leon and Fr. David earning their livings as full time iconographers. While both have sadly passed away, Fr. David in 1993 and Leon in 2010, the Trust aims to build on their legacy and make St. Seraphim’s a space for the study and practice of iconography once again, reflecting the life and work of St Seraphim of Sarov through publications, literature and icons.

The garden has wheelchair access and will be open in the Spring, on days when we have stewards there, or by request.

Chapel and exhibition: 9am – 5pm, seven days a week.
Garden: occasional opening, when the open sign is out.
Telephone in advance.
There is an annual service in the chapel on July 19th for St Seraphim’s Day.

St Seraphim’s is in Little Walsingham, half way between Fakenham and Wells-next-to-the-sea. From the Fridat Market Place, just off Walsingham Highstreet, take Station Road to the right of the Black Lion Pub. The Chapel is located at the top, next to the coach park. Alternatively, if arriving on the Wells-Walsingham Light Railway, simply cross the Egmere Road and walk straight, we are the first building on the left.