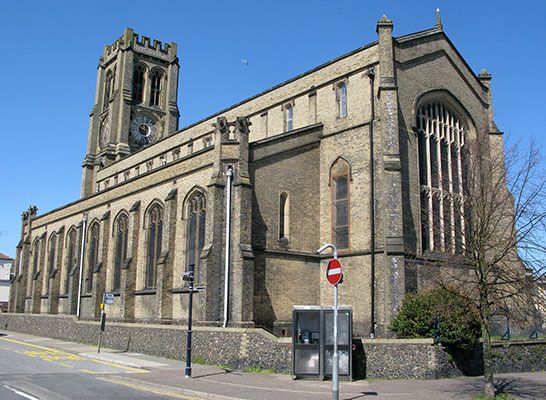 Saint Spyridon’s Greek Orthodox Church in Great Yarmouth was originally an Anglican church built in 1831. Previously the parish church of Great Yarmouth, this large church building was constructed by Mr. J.J. Scoles in 1831 with the impressive four dial clock added in 1876.

The chuch was re-dedicated to the Greek orthodox church in 1963.

Saint Spyridon is the Patron Saint of our Church here in Great Yarmouth but his story starts in Cyprus. Known as Saint Spyridon of Tremithus, he born towards the end of the third century on the island of Cyprus where he was a shepherd with a wife and children.

Originally the Anglican Parish Church of St Peter, the Church was built in 1831 as a Georgian church and was the early work of Yarmouth church builder Mr J.J. Scoles. The impressive four dial clock was a later addition to the church in 1876 and the tower originally had pinnacles but were seen as dangerous and removed as early as 1860 and new glass windows were installed.

As St Peter’s, the church fell out of use in the 1960s along with many other 19th century churches in South Yarmouth. Most of these churches were demolished but luckily St Peter’s was given to the growing Greek community in Great Yarmouth in 1963 and was formally dedicated to the Greek Orthodox church in April 1983.

Today, the church has undergone a transformation as the exterior has been renovated to restore it to its former glory. The interior is vibrant with the altar and sanctuary featuring an iconostasis of the Saints and the church is the bustling heart of the local Greek community with a variety of classes an events taking place there on a regular basis.

There has been a Greek presence in Great Yarmouth since the 1940s and we have around 200 families attached to our church with an attendance of about 120 to our Sunday services.

The Church building also houses a community hall and a busy Greek school as well as having Greek dance classes. We hold regular Greek dinner and dances to raise money for charity and the Church celebrated 50 years as a Greek Orthodox Church in 2015.