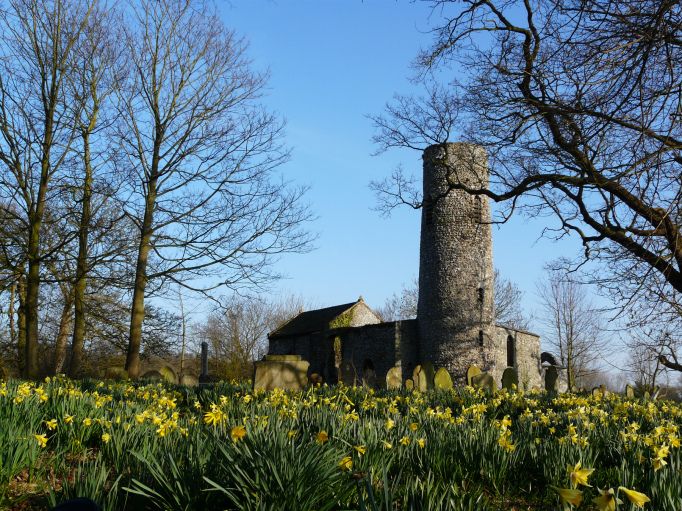 A gentle walk (200 yards ) from the Great Hautbois Road.

“A ruined church, winter bare trees in the deserted churchyard and the jackdaws’ cry. All are reminders of mortality – a fitting backdrop for the Lenten fast! The reused bricks and conglomerate stone incorporated by the 11th century the builders recall “the glories that were Rome”. Once this building housed a miraculous wonder-working image of St. Theobald to which pilgrims flocked. Often when I come here to pray , there’s just me and some friendly horses. That’s fine for someone who seeks solitude but do these deserted and neglected ruins point towards the Church of England future?”
Ah! I have left out the most amazing thing that one day totally transformed a dismal scene! “A host of ….daffodils !”
On a March day back in 2009, like William Wordsworth’s Lake District flowers, these were abundant and “danced and fluttered in the breeze.” I think I know what the poet meant when he wrote:
For oft, when on my couch I lie
In vacant or in pensive mood,
They flash upon that inward eye
Which is the bliss of solitude;
And then my heart with pleasure fills,
And dances with the daffodils.”

Come earlier in the year for snowdrops!