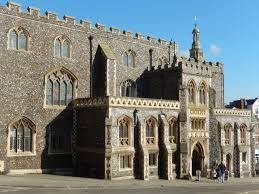 Norwich Guildhall was the centre of city government from the early 15th century until its replacement by City Hall in 1938.

Norwich Guildhall was the centre of city government from the early 15th century until its replacement by City Hall in 1938.
The exterior provides an excellent example of the flint work that the city is so famous for. The east end of the building was reconstructed in the 16th century and is crafted from alternate squares of faced flint and ashlar stone, giving the building its chequered effect.

As well as various courts, a prison and a chapel the building contained facilities for accounting and tax collection, accommodation for civic officials (it remains the home of the Sheriff’s parlour today) and storage space for records, money and civic regalia.

The Assembly Chamber (or Sheriff’s Court) was designed for meetings of the full medieval Council. It now contains a virtually intact late Victorian courtroom. Also known as the ‘Sword Room’, the roof space was once the storage place of weapons.

The Council Chamber (or Mayor’s Court) is more elaborate. Oak panelling, a sixteen-bay roof with tie-beams, renaissance decorative woodwork and stunning stained glass were from the start designed to impress.

The undercroft, beneath the east end pre-dates the building, and is thought to be an original feature of the earlier toll-house on this site. It was used to accommodate more dangerous criminals.