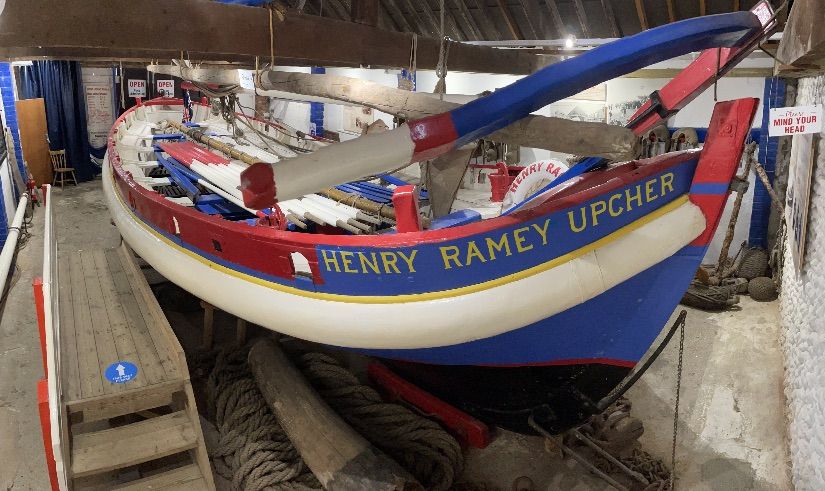 The Museum houses the Henry Ramey Upcher private lifeboat, in service 1894 to 1935.

The Fishermen’s Lifeboat Museum is the home of the Henry Ramey Upcher, Sheringham’s last private lifeboat built in 1894 and in service until 1935, still housed in the original boat shed from where she was launched. The museum is dedicated to the history of the lifeboats financed by the Upcher family of Sheringham Hall to be manned by the fishermen of what was originally Lower Sheringham and includes a wealth of information on the earlier Augusta lifeboat 1838-1894. Exhibits tell stories of Sheringham’s fishing and boat building families of those times.

Sheringham’s Fishermen’s Lifeboat Museum is dedicated to telling the story of the lifeboats financed in the 1800’s by the Upcher family of Sheringham Hall for the use of the fishermen of what was originally Lower Sheringham, then a small fishing hamlet which grew steadily during the 19th century. The Upchers provided three boats in all and the main exhibit is the last of these, the Henry Ramey Upcher private lifeboat. This fine example of a rowing and sailing lifeboat was built in 1894 and was in operation until 1935. It can be seen in its original boat shed which forms part of the museum. The museum also has exhibits relating to the other Sheringham lifeboat that was paid for by the Upcher family: the Augusta (1838-1894), famous for its rescue of the crew of the Ispolen. Within the museum are memorials to the lifesaving actions of the fishermen and exhibits that tell stories of Sheringham’s fishing and boat building families of those times. The museum records the history of the renovation of a rare surviving example of long shore fishing storage sheds and the creation of the present Lifeboat Museum.

The museum is situated at the top of the Fishermen’s Slope slipway close to the West Promenade Sheringham, at the seaward end of West Cliff.