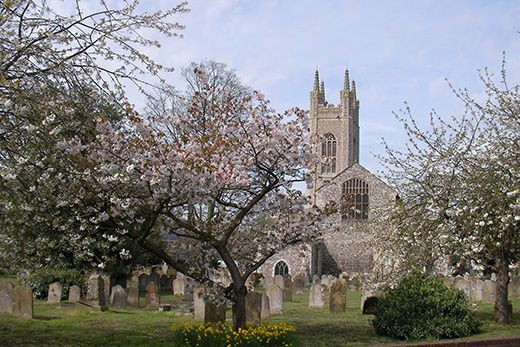 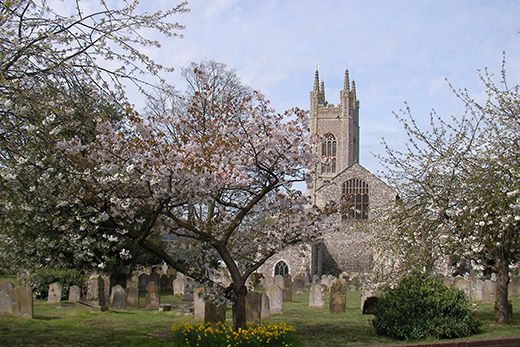 Brilliant carvings and legendary beast….
The present church of St Mary is the parochial nave, aisles and tower of the priory church of the blessed Virgin Mary and the Holy Cross, built for an order of Benedictine nuns which had been founded about 1160 by Gundreda, wife of Sir Roger de Glanville.

It replaced an earlier Saxon church on this site which was one of five churches in Bungay mentioned in the Domesday Survey of 1086. Stretching eastwards from the present east wall are the ruins of what was the conventional quire, where the nuns heard Mass and recited their daily round of Offices. These fragments incorporate work of the 13th century and stretched some 60 feet eastwards from the nave, deflecting very slightly to the north.

It was during the 15th century that the present nave, aisles, porch and tower were built and wills of mediaeval people shed some light on this work. In 1442 Thomas Croft bequeathed money towards building the tower; in 1444 a chaplain named Reginald Cakebread left £1 towards building the ‘new’ tower which is also mentioned in wills of 1456 and 1471-73. The aisles and porch were clearly being worked upon during this period too and were possibly completed about 1450.

The 16th century saw great changes at St Mary’s. After 1536 when the Priory closed as a result of the dissolution of the lesser monasteries by King Henry VIII, the nuns quire and the nunnery buildings were allowed to go to ruin. Whilst the nave and aisles were retained as the parish church with the Reformation in the mid-16th century, much of the colour and carving, the great Rood, the statues and a host of other visual aids to teach the faithful were removed and the interior was equipped for the liturgical requirements of the reformed church with its services and scriptures in English. More damage was done by the Puritans in 1643-44 in their zeal to rid churches of superstitious images and inscriptions.

Their inspector, William Dowsing of Laxfield, probably visited this church to specify which carvings, paintings, stained-glass windows, Latin inscriptions, etc. were to be destroyed.

The greatest damage of all however was caused by a terrible fire on 1 March 1688, which devastated Bungay town, leaving some 200 families homeless and badly damaging this church, especially the tower and south aisle, melting the bells and destroying much of what was combustible inside. It is said that the inhabitants, seeking refuge, entered the church with their treasured possessions already burning. Following this disaster, major restoration and refurbishment took place. The south aisle roof was completed in 1699 and the handsome new altarpiece was installed in 1701 – the year that the church was reopened.

When David Elisha Davy visited St Mary’s in 1810, the internal decor formed a wonderful 18th-century period-piece. The interior was seated with uniform wainscoted box pews, the entire length of the south aisle was filled with a large gallery, and upon another gallery at the west end stood a fine organ, at that time a rarity in parish churches, which had 1,100 pipes and 21 stops – the gift of Robert Scales, who died in 1728. Dominating the interior, rising majestically above the communion table, which was enclosed on three sides by rails, and filling the width of the east wall, was the mighty panelled altarpiece. This had five compartments with the Ten Commandments in the centre, above which were the royal arms of King William III flanked by the painted figures of Moses and Aaron, who were in turn flanked by the Lord’s Prayer and the Apostles’ Creed.

Restoration and reparation continued throughout the 19th Century, with the addition of new seating and the blocked porch windows being reopened and reglazed. The altarpiece was replaced by the present stone panelling and reredos.

In 1977 it was decided that Bungay should have one parish church and, accordingly, St Mary’s was retired from full-time parochial use. In 1981 it was vested in the Redundant Churches Fund (now The Churches Conservation Trust) to be conserved by and for the Church and the Nation as a sacred, beautiful and historic building. Since then extensive work has been carried out on its maintenance and repair under the direction of its appointed architects, initially Mr Neal Birdsall and subsequently Ruth Blackman of Birdsall, Swash and Blackman.

St Mary’s is in the Town centre of Bungay. The nearest Railway station is Beccles (4 miles).