Felixstowe Spa Pavilion Theatre. A glorious seafront theatre and restaurant complex, with stunning views, an art deco auditorium for up to 900 people

Description
Pricing
Other Events at The Spa Pavilion Theatre
Description

This iconic venue has a fascinating history. It originally opened as ‘The New Floral Hall’, a true seafront pavilion, in 1909, in replacement of the previous Edwardian Bandstand, and soon became known as the Spa Pavilion. The Pavilion was then completely re-vamped and extended in the late 1930’s, and re-opened as a large theatre and music hall in April 1939. Sadly the outbreak of war ensured that it was hardly used before a bomb and other damage put the building out of action in 1941, rendering it derelict. Re-built again, from it’s re-opening on 26th May 1950 The Spa was a thriving seaside venue right up until the 1990’s.

The café which had been added for the 1950 re-opening was extended to the front of the original building to incorporate a previous balcony, and left with a much smaller open area. In the early 1970’s this smaller balcony was enclosed by the current full height windows to the front. A gradual decline from the end of the 20th Century led to the closure of the theatre in 2013. Following this, it was acquired by the current owners on May 15th 2015 and re-opened later that year. 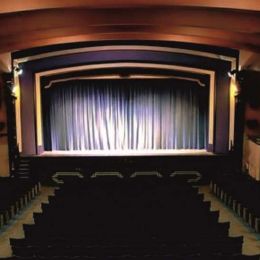