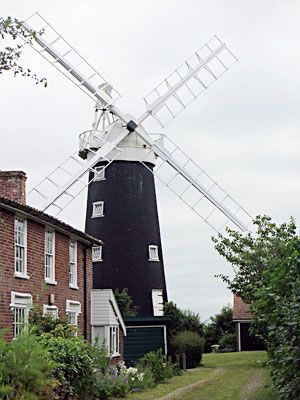 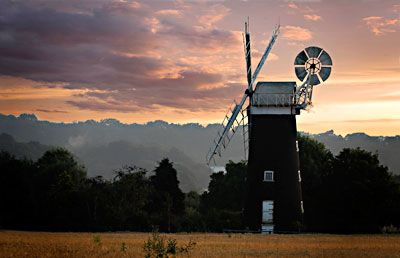 Wicklewood towermill in the High Street was of a tarred brick type construction. It was built 1845-46 by Richard Mann and the 5 storey mill was 43 feet high with a ground floor diameter of 17 feet. The tower originally had two ground floor doors but the northern was was later bricked up, possibly at the time the drive from the external auxiliary engine was installed.

White’s directories of 1836 and 1845 list Richard Mann as a bricklayer and beerhouse keeper. In order to build the mill he borrowed money from John Mitchell, Edward P. Clarke, John Harman, Sophia An Jones of Wymondham and ? Pomeroy. Although the 1845 tithe award gives Richard Mann as both owner and occupier, the first miller listed was John Browning Mallett in 1846.

Richard Mann obtained a further mortgage for £180 in August 1850 from Harmer & Clarke and on 16th October 1861 both mortgages were transferred to widow Sophia Ann Jones of Wymondham.
On 11th November 1882 Richard Mann, yeoman sold the mill and house to Samuel Winter, baker, of Pitt St., St. Augustine’s, Norwich for £355.

William Wade bought the mill for £330. He had previously learnt the milling trade from Samuel Mann at Wicklewood’s Hackford Road mill before working at one of the three Martham windmills working at that time. He then spent time at both Cringleford and Marlingford watermills before becoming a corn chandler at Wymondham. The mill stayed with the Wade family for the rest of its working life. The mill ceased working in 1942 just before William Wade died, leaving the mill to son Dennis Wade and by the 1970s it had become derelict.

On 16th October 1977, William Wade’s granddaughter, Mrs. Margaret Edwards, formally handed the mill over to Mr. A. G. Hodges, Chairman of the Norfolk Windmills Trust for restoration and preservation before being opened to the public on certain days.

During William Wade’s tenure the mill was run as a grist mill, grinding farmers’ corn and delivering the meal back to them as feed – in 1933 for 1s. 6d. per coomb. In 1937, Kelly’s Directory listed William Wade & Son as millers. William had brought Dennis, one of his three sons into the business. Dennis left scool at the age of 14 and began working in the mill in 1908. His two elder brother were already working for their father. His first jobs were to sweep the mill from to to bottom and to cut chaff to feed the two horses. Dennis inherited on William’s death in 1942, although the mill had already just ceased working. Dennis later wrote – We carried on till 1942 when conditions having changed so much with farmers grinding their own corn, we had to call a halt. Dennis Wade died on 5th April 1978 aged 78 and left the mill to one of his daughters, Mrs. Margaret Edwards.

c.1980, Harry Apling reported that Mrs. Stanley Arthur Mann of Wicklewood was the granddaughter of William Vout. Her mother was Julia Vout and her siblings were Walter, Herbert and Howard. William Vout went to East Bradenham towermill. Herbert Vout went to Ditchingham towermill – owned by Walter Vout of Hardwick and Hempnall. The cap was removed for renovation in 2005 and replaced again on Friday 21st July 2006 along with a new upright shaft. The Norfolk Windmills Trust said they also intended to replace the steel sails with more traditional wooden ones, with the intention of eventually recommencing milling operations.