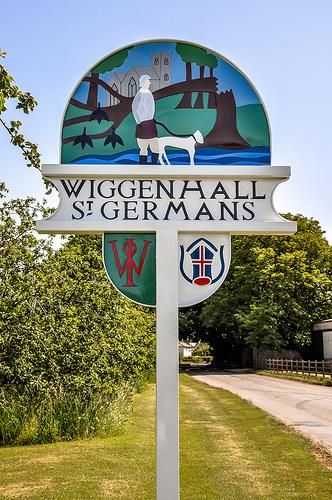 Wiggenhall St Germans is situated 5 miles south of King’s Lynn and has developed on both east and west sides of the River Great Ouse.

Wiggenhall St Germans is situated 5 miles south of King’s Lynn and has developed on both east and west sides of the River Great Ouse.
The parish includes the hamlets of Wiggenhall St Mary the Virgin and Wiggenhall St Peter. It was the site of Fitton, the ancient seat of the Howard family.
Much of the surrounding countryside is rich arable land and is in fact slightly below sea level. The area is a characterised by a network of waterways, sluices and pumps which are used to manage water for drainage and irrigation in the area.
Nestled beside the east bank of the river is the village shop, a hair dresser and public house The crown and Anchor. Also nearby is the village church St German’s, which is thought to have Norman origins. The earliest surviving part is the base of the tower, which may be as early as the 13th century, though the majority of the church dates to the 14th century. Inside a number of interesting bench ends survive, depicting the Seven Sins.
The churches at nearby Wiggenhall St Mary the Virgin and Wiggenhall St Peter are no longer in use although much of their structures remain.
Wiggenhall St Germans in on the National Cycle Route 1 and also very close to point at which it is joined by Cycle route 11. The village is also on the Fen Rivers Way which runs along the east bank of the River Great Ouse at this point.