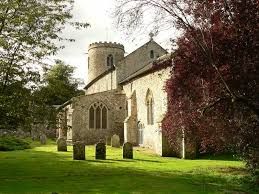 Yaxham is a village and civil parish in centre of the English county of Norfolk. The parish includes the village of Yaxham, together with the neighbouring community of Clint Green. Together, they lay some 2 miles (3.2 km) south of Dereham and 20 miles (32 km) west of Norwich.

“Yaxham St. Peter” is one of 124 existing round-tower churches in Norfolk.

Yaxham railway station in the village is on the Mid-Norfolk Railway, a heritage railway running between the historic market towns of Wymondham and Dereham. The Yaxham Light Railway can also be found adjacent to the railway station.