More than 230,000 see Dippy the Dinosaur’s farewell at Norwich Cathedral

Dippy the dinosaur’s visit to Norwich Cathedral came to a close with a special farewell service after a 16-week stay which attracted more than 234,000 visitors.

The Natural History Museum’s iconic 26-metre Diplodocus cast had been on display at Norwich Cathedral since July as part of Dippy on Tour: A Natural History Adventure, with the Cathedral being the final stop and only Cathedral on the eight-venue tour that was enjoyed by more than two million people nationwide and designed to inspire people of all ages about the natural world. 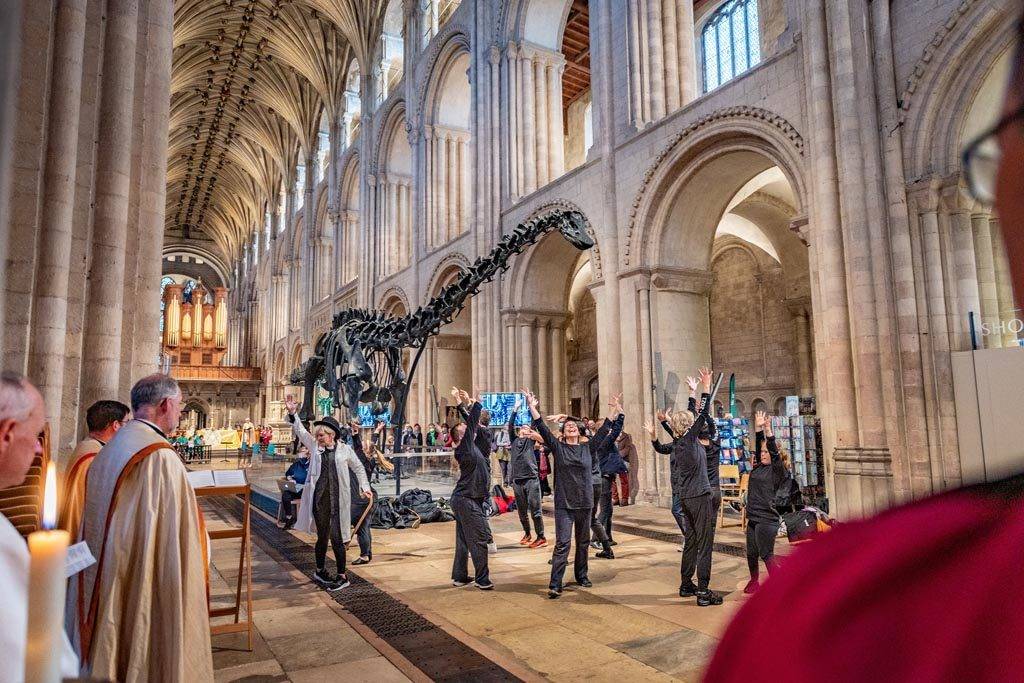 On Sunday 31 October, the day after the Dippy on Tour exhibition officially closed, the Cathedral said goodbye to its prehistoric guest with a Farewell Evensong that took place around the Jurassic giant.

Norwich Cathedral Girls’ Choir, Norwich Cathedral Children’s Choir and Total Ensemble Theatre Company all participated in the service which was led by the Dean of Norwich, the Very Revd Jane Hedges and the Revd Canon Andy Bryant, Canon for Mission and Pastoral Care and the Cathedral’s Dippy Project Manager. 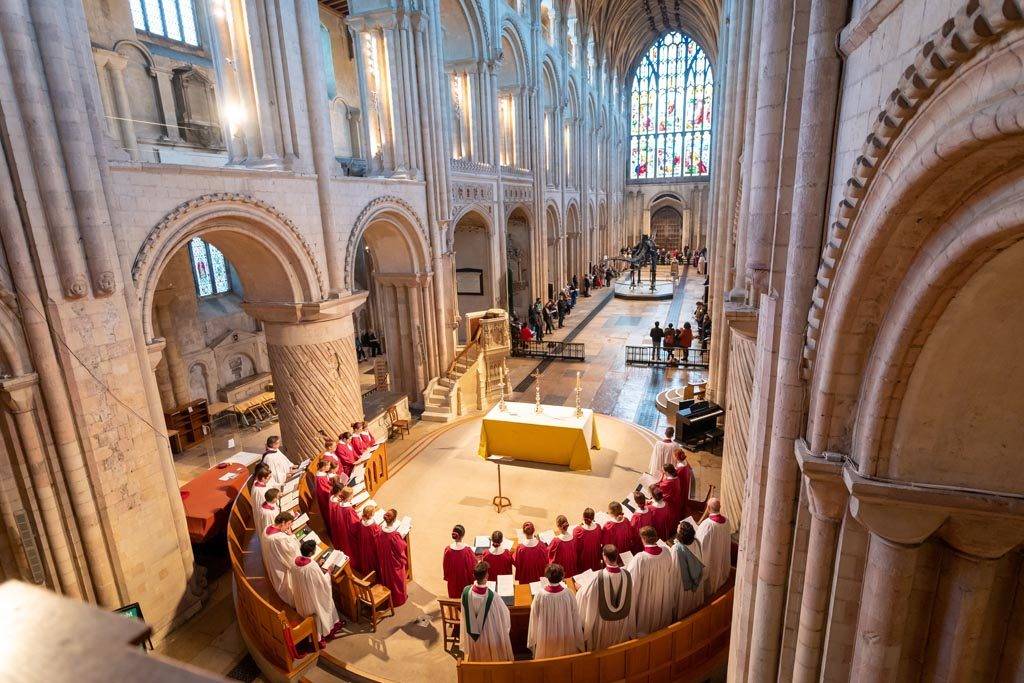 In the opening prayer, the Dean said: “God of creation, as Dippy makes us marvel on the wonder of life before our time, we thank you for the wonderful world you have given us: help us to see the world through your eyes, and to work together to return the world to a place where all life thrives.”

Speaking about the initiative, Visit East of England executive director Pete Waters said, “Congratulations to Norwich Cathedral. This was a bold project that has been a fabulous success and demonstrates that with imagination and creativity venues can increase footfall.”

During the service, the choirs sang Creation Song – which was written by composer Bob Chilcott especially for Dippy’s stay in Norwich – as people were encouraged to write a pledge for how they personally would help to protect the planet. As the service neared its end, Total Ensemble Theatre Company performed a farewell dance in front of the Diplodocus cast. 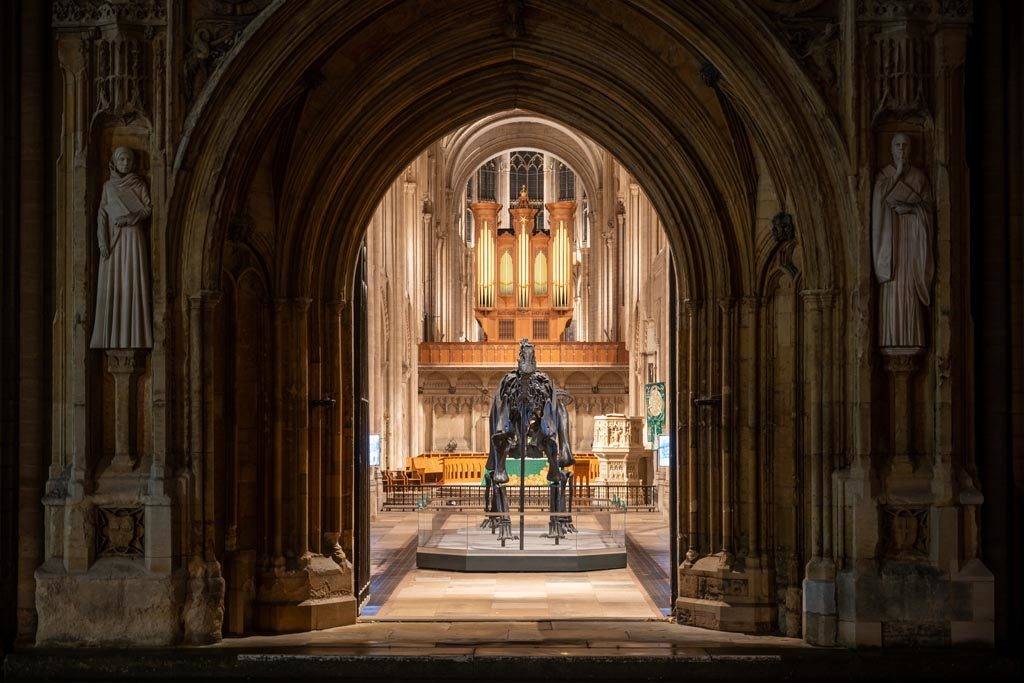 The special service followed an incredible final week, which during the evenings saw Dippy lit up like never before in the Cathedral’s Nave for the farewell light spectacular Dippy at Night. More than 6,100 people came to the evening event over six nights, with the first night reserved especially for emergency services workers and their families as a thank for their continued compassion and dedication to helping others throughout the Coronavirus pandemic.

The Dean of Norwich, the Very Revd Jane Hedges, said: “We have been on such an amazing journey with Dippy over these last 16 weeks and it is brilliant that more than 234,000 people have been able to join us on this incredible adventure.

“The last week – with the stunning Dippy at Night illuminations and our farewell service – has been a wonderful celebration of Dippy’s time with us.

“We shall really miss our magnificent prehistoric guest but the amazing memories of Dippy’s stay in Norwich, and the impact of the important conversations about our planet that he has inspired, will last long into the future.

“As we say goodbye to Dippy, I would like to say a very big thank you to the Natural History Museum for inviting Norwich Cathedral to be part of Dippy’s story and also to all the individuals and organisations across Norfolk who have helped to make Dippy’s stay here such a wonderful success.”

A total of 234,605 people visited Dippy on Tour at Norwich Cathedral. As well as seeing Dippy, people could also have fun exploring a time tunnel, walk through a wave of fish and add their own pledge to protect the planet on the trees in the Reflection Zone.

More than 10,000 young people visited Dippy on Tour at Norwich Cathedral with their school or with organisations including Guiding and Scouting groups. About 1,000 schoolchildren from schools across the county took part in the Sing to Dippy project which culminated in special performances of Creation Song around the famous dinosaur.

The Cathedral also offered autism-friendly sessions and special times for looked after children to explore the exhibition and also for organisations including the intergenerational charity Friend in Deed and Vision Norfolk, which supports people living with sight loss and visual impairment. 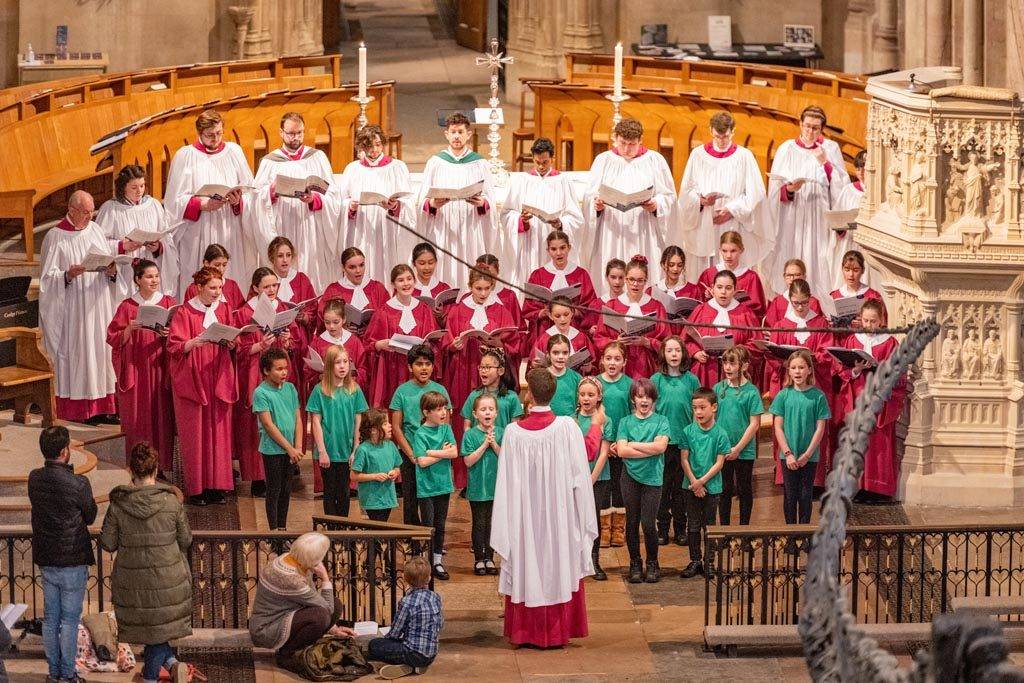 Nearly 120,000 of the visitors explored Dippy’s home in Norwich in greater detail and visited the Cathedral’s east end as well the Dippy on Tour exhibition in the Nave.

More than 12,000 people enjoyed the wider Dippy events programme. In addition to Dippy at Night, the most popular events included sold-out film screenings of Paddington (in which Dippy makes a cameo appearance) and Jurassic Park, a sold-out talk called Who was Dippy? by biologist, author and broadcaster Ben Garrod, and the regular Saturday morning children’s storytelling session Dino Tales which took place under the tail of Dippy.

As well as giving people the chance to see a dinosaur cast up close, Dippy’s visit was also about encouraging people to engage with nature and help protect the planet for the future, and the trees in the exhibition’s Refection Zone had more than 12,000 leaves added with individual pledges from people – ranging from walking to school every day to planting vegetables and recycling more.

The weekly Talkative Tuesdays programme, which was attended by more than 800 people, further put the spotlight on today’s climate crisis alongside focussing on the encounter between faith and science through the ages.

With Dippy’s tour now at an end, the nation’s favourite dinosaur is heading back to the Natural History Museum where he will go display in summer 2022 in a new temporary installation which will run through to Christmas 2022.

Meanwhile people can still enjoy exploring the Dippy on Tour exhibition via a 360 3D tour on the Norwich Cathedral website www.cathedral.org.uk 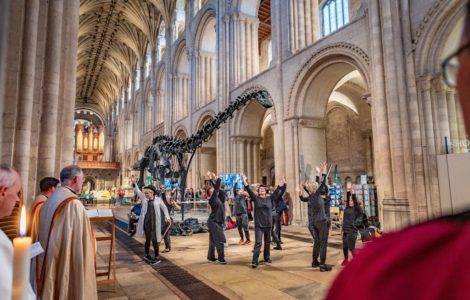