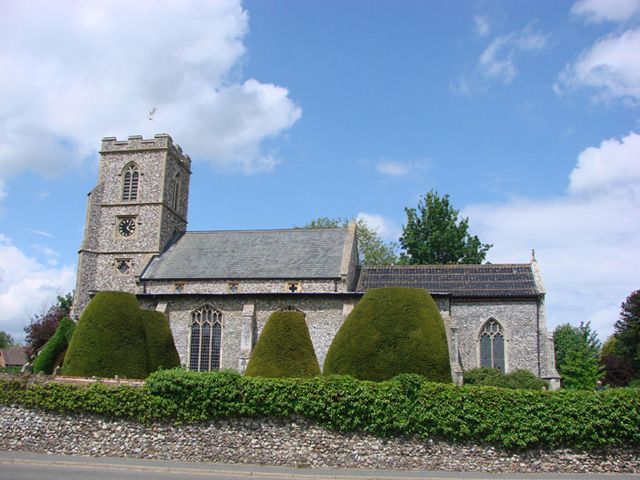 Buxton is a village in Norfolk, located between Norwich and Aylsham. The village is mentioned in the Domesday Book of 1085. Buxton is adjacent to the village of Lamas. The two villages are separated by the River Bure at Buxton Mill but are otherwise indistinguishable. Together they form the civil parish of Buxton with Lamas.

The Sewell family, and their predecessors, the Wrights, dwelt at Dudwick Park, a mansion in a private park on one side of the village. This was bought by John Wright (1728-1798), a wealthy Quaker banker. His endowments founded the present school, as well as the Red House, an institution for young offenders which stood where the Rowan House complex stands. These were erected by his grandson and heir, the second John Wright (1794-1871). He married a member of the Harford family, also Quakers, but died without issue, the property passing in 1856 to his sister’s eldest son, Phillip Sewell, another Quaker banker. Phillip Sewell, the brother of Anna Sewell, was a major local benefactor, and enlarged the local school, a fact recorded on a memorial plaque on the old buildings. The Sewells, like many Quaker landlords, were philanthropists, and gave the village a Reading Room, as well as supporting a school and reformatory. Their last gift to the community was the Village Hall, built 1927 and since extended. The Sewell connection ended in 1937, when P. E. Sewell, a Ceylon Tea-planter, died, leaving Dudwick Park to Percy Briscoe, a friend from Ceylon. The house was rebuilt in the early part of the twentieth century, and, externally, no trace remains of the house which Anna Sewell would have known.

The builder Thomas Cubitt was born here in 1788. Roads in the newer estates in Buxton record the association of the Stracey and Sewell families with Buxton.