Sisterhood explores the 17th Century East Anglian witch trials from the perspective of three women accused of witchcraft. Locked up in a church the night before their trial they support and amuse each other with anecdotes and by drinking the church’s communal wine. 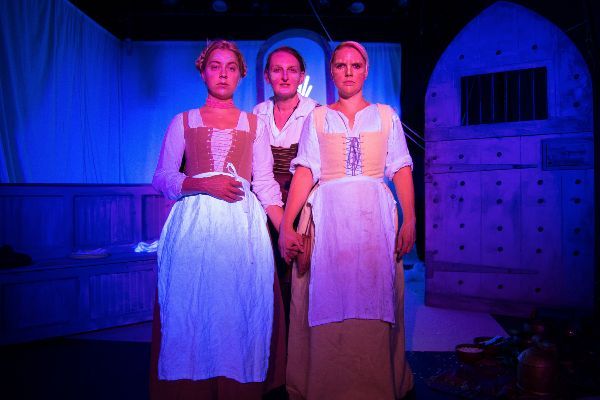 In the 17th Century the infamous self-proclaimed Witchfinder General Matthew Hopkins waged a personal vendetta against women in East Anglia. Seeing Witchcraft everywhere he was determined to use whatever means necessary to convict and execute any woman he suspected. In just three years he was responsible for killing 60% of those executed for witchcraft in the UK.

Three women, aged 20, 40 and 60 (without a virgin, mother or hag in sight) are in a church cell, on the night before their trial for Witchcraft. Split between two timelines, Sisterhood takes in the history of the infamous 16th century witch trials alongside modern-day concerns women face in a world of political and environmental upheaval. The stories of the 16th century characters interweave with episodes from the performersÕ own lives, revealing an immediate and clear association. The play has been likened to The Handmaids Tale – Ôbut with more hopeÕ.

With its opening date on a full moon and moving towards Halloween, the play undertakes a ÔHealing tourÕ of East Anglia, visiting 10 of the principal locations associated with the HopkinsÕ reign of terror. Booth is a local, having grown up in Braintree, Essex, and has spent the last 30 years working as a Tudor at Kentwell Hall Re-Creation in Long Melford, Suffolk.

Jolie Booth said ÔSisterhood is a call to dis-arm the patriarchy through community, through the world-wide womenÕs web, to treat our-selves and each other with the respect, grace and honour that Mumma Earth – the divine feminine – requires. In the 15th and 16th Centuries women were set against one another in the notorious witch trials, and there are obvious parallels today. In creating the show I worked with an awesome team of women who have collaborated to play their parts in strengthening the bounds of sisterhood. Together we can all rise up and stand as one against a system that is corrupt, destructive, divisive and has been pushing people and the planet around for far too long…Õ

Sisterhood was written by Booth and is performed by Jules Craig (Marjorie), Jolie Booth (Alice) & Coco Maertens (Kitty). The play is also being published as a novel by KingÕs England Press.

Take the B1062 from the A143, Homersfield Road junction. It is then 2 miles to Flixton.